Realistic combat training has always been difficult; although troops could fire blank ammunition, it relied upon troops being honest about feeling they had been hit, or an umpire to take them out of the exercise. By the early 1980s technology had advanced to the point that electronic systems using lasers started being used to help accurately simulate combat, the system being known as ‘Small Arms Weapons Effects Simulator’ that combined a laser sight with a special vest to simulate hits during training:

Tonight it is the vest from this set we are taking a detailed look at. The vest is made in green nylon and is designed to be worn over the upper torso and shoulders: 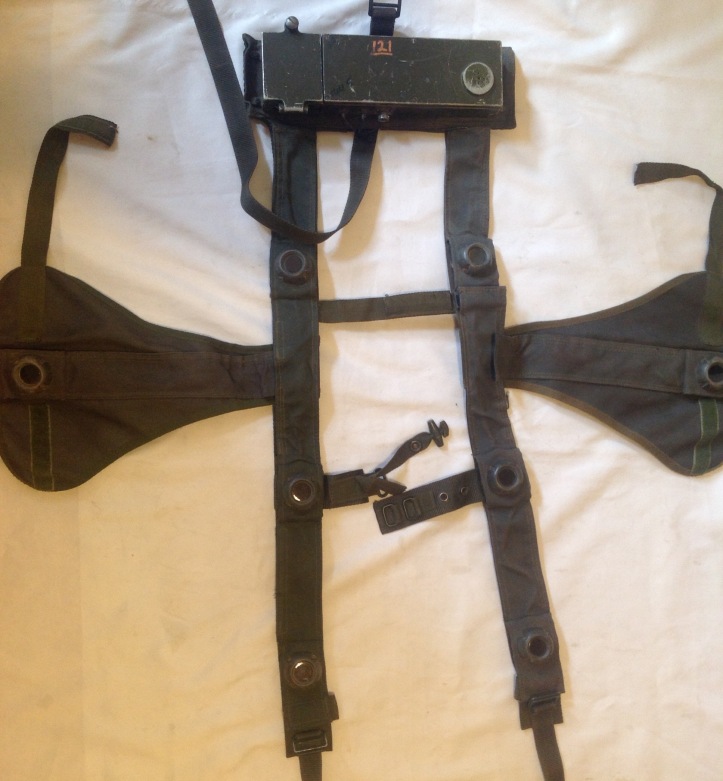 A series of  laser receptors are attached around the vest: 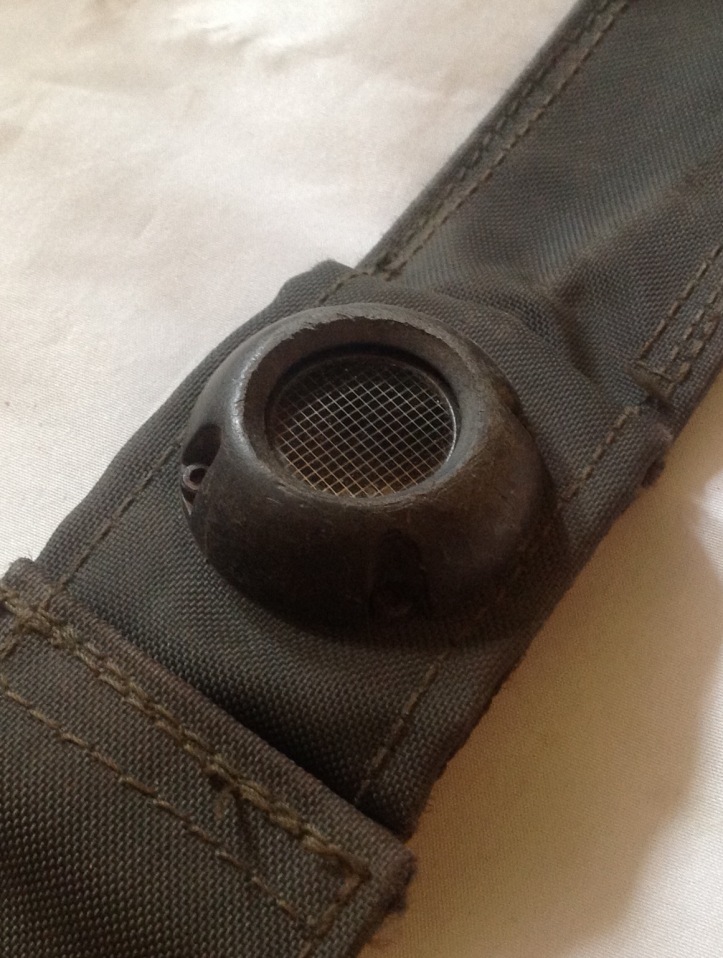 These are secured with metal backing plates and screws: 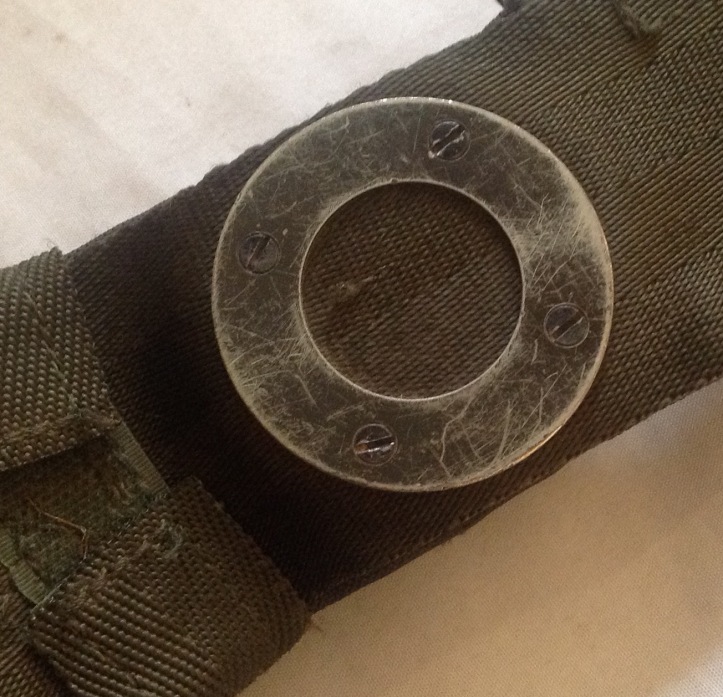 Brassards are fitted to each side to go over the shoulders, secured in place by Velcro straps: 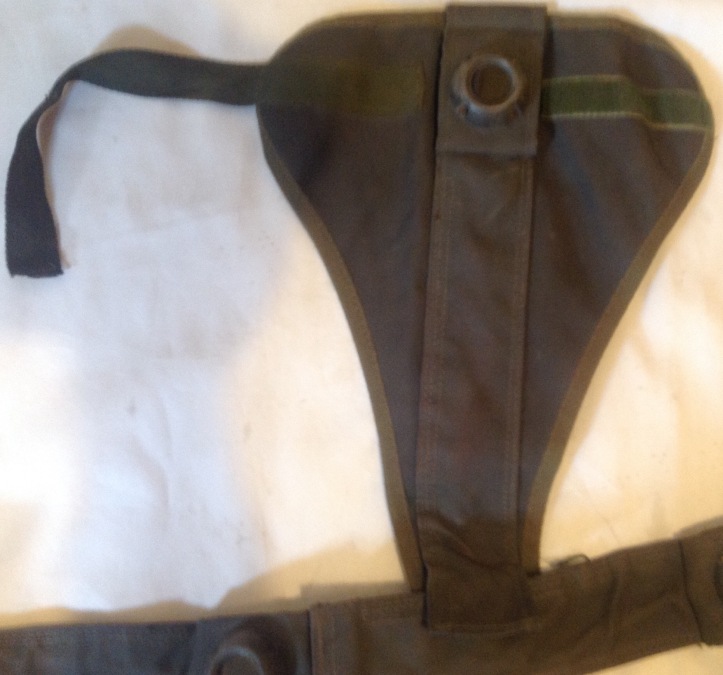 The harness fits over the chest, and a central securing strap is fitted to help hold it in place, a toggle and quick release tab allowing it to be easily undone: 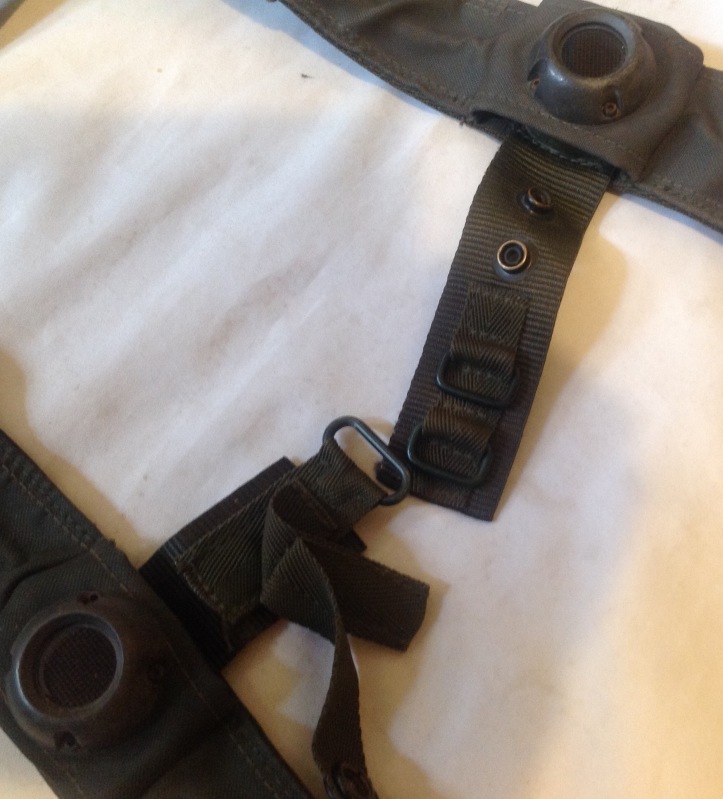 The front straps pass down the front, with a strap going around the wearer’s webbing belt and back up to secure to the shoulder straps:

A third strap at the rear passes down, around the belt at the rear and back up to a buckle by the computer unit: 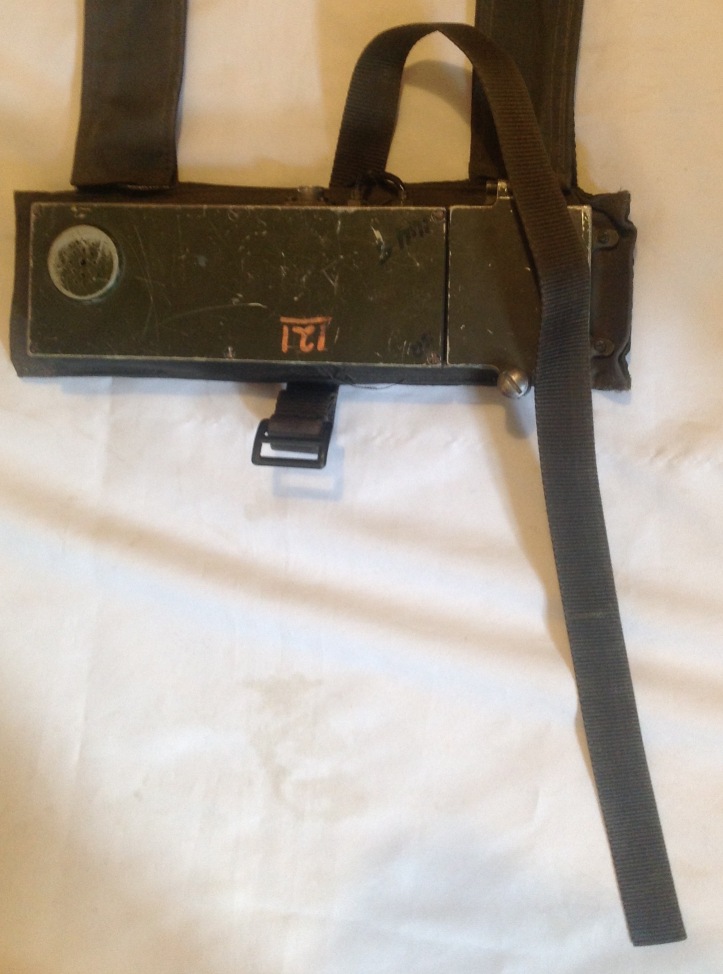 The computer unit sits in the small of the back and is made of metal, painted green:

A thumb screw gives access to the 9v battery position to power the vest: 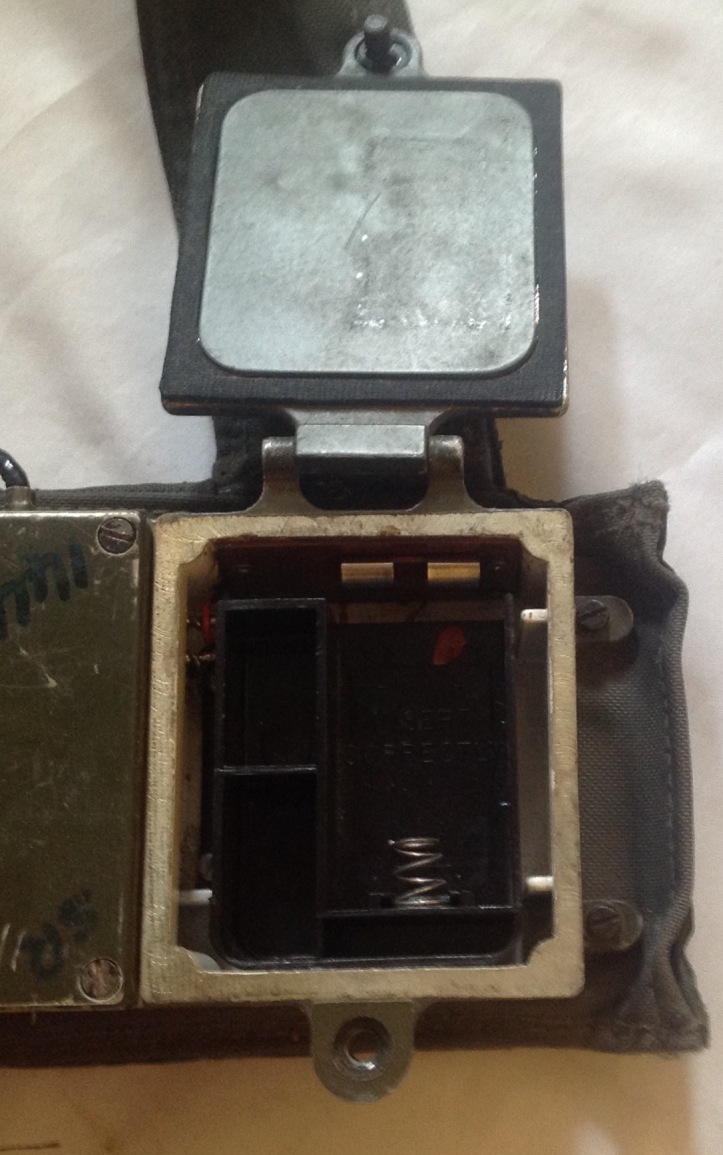 When the user is hit, an alarm goes off and a speaker is fitted to allow this to be heard: 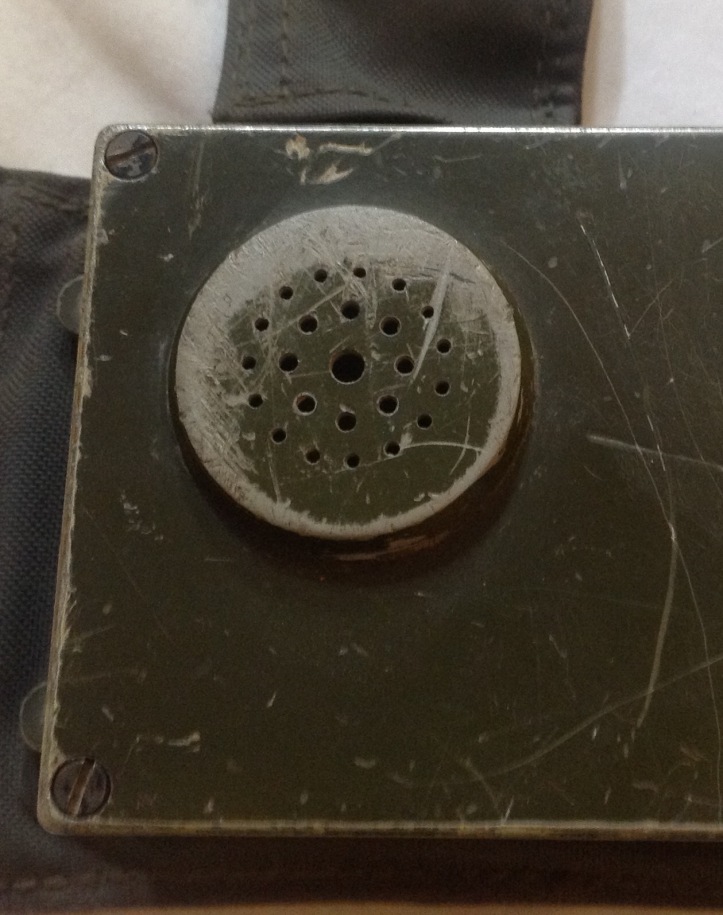 The user has to lay on his back to silence the alarm, making him a casualty and knocking him out of the exercise. Originally the vest was worn with a helmet band as well (these seem very rare now) and a wire went from the sensors on the helmet down to the computer box, joining through a connector on the top edge of the box:

Note also the /|\ mark and the date of 1982. These markings are repeated on another label on the rear of the processing box: 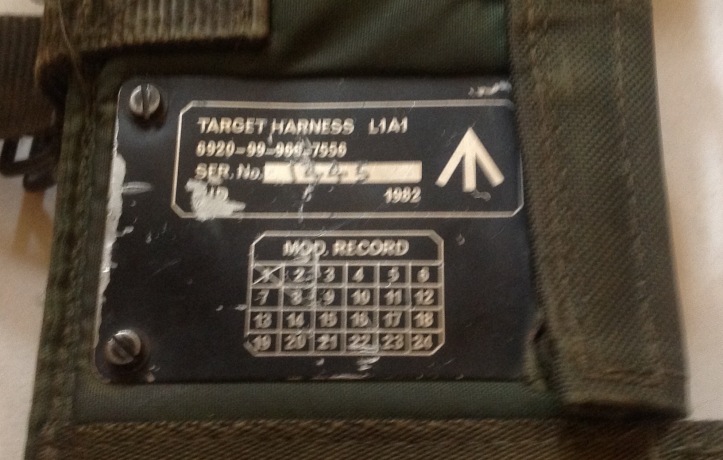 This receiver came in its original storage box, a sturdy cardboard box: 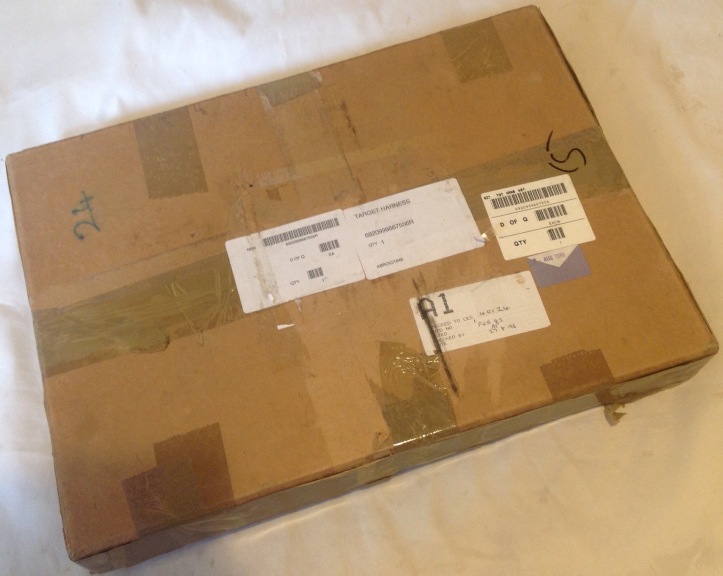 Internal fittings hold the receiver in place and a piece of foam on the underside of the lid helps hold everything secure: 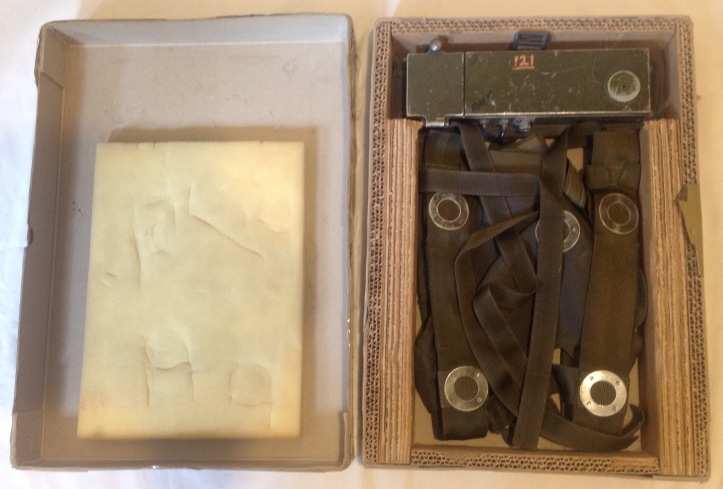 Stores labels on the outside show that this device remained in inventory for many years, at least as late as 1998: 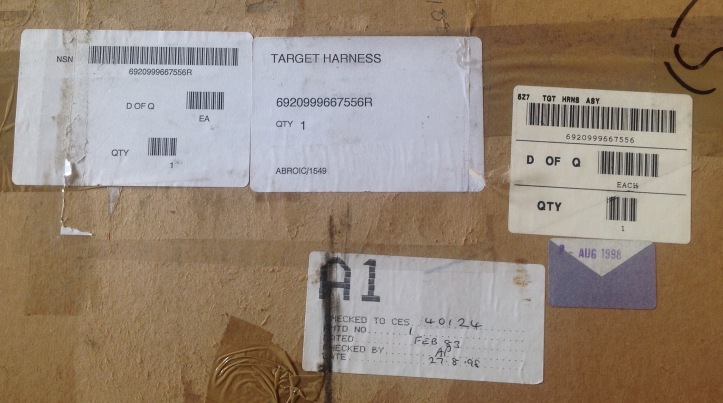 The most detailed information I can find on the SAWES system comes from a 1983 article in Army Training News: 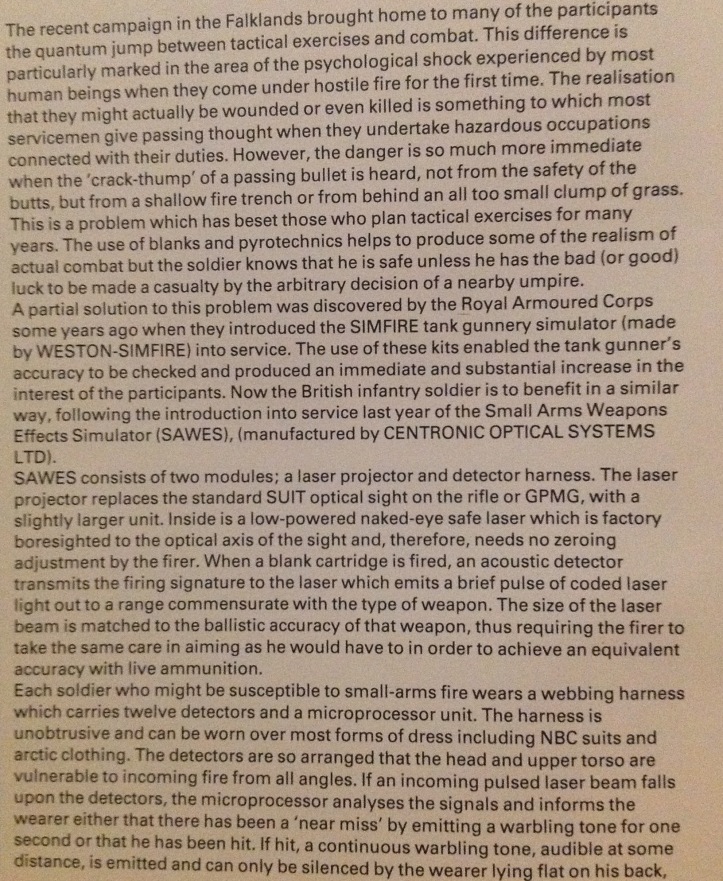 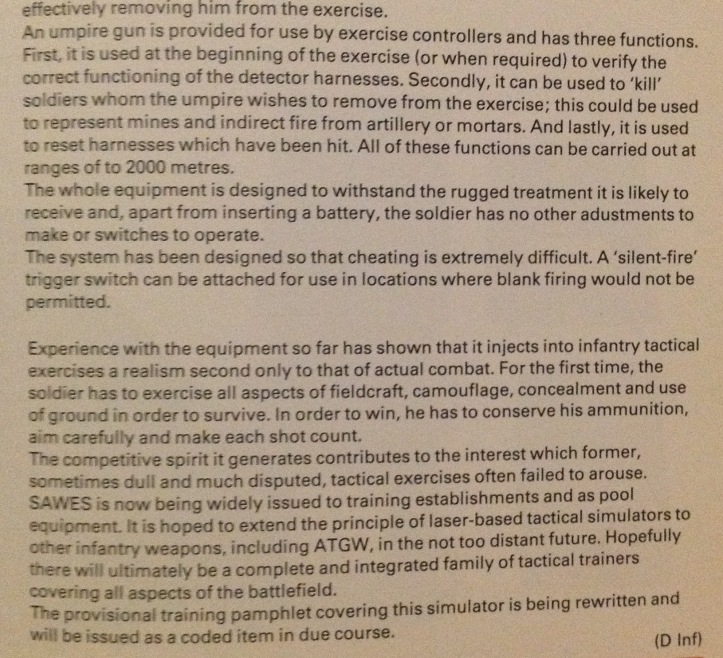 Richard Aixill used the SAWES set in the 1980s:

SAWES was a training aid and in principle a good idea but it didn’t work too well in practice. I used SAWES in Warminster in 84/85 for demonstration purposes but not after. I don’t think it got much use. It had a few negatives but one major one – do you really want to demonstrate how many of you are going to get shot – even when you are doing everything right in a section attack? Not good for morale.

Sadly the sight unit to go with this for an SLR is very rare, although versions adapted for the SA80 are available and I will look into adding one of these to my collection soon.