When introduced the SA80 bayonet was quite a departure for the British Army. The new SA80 rifle was very different from anything that had been issued before, being shorter and lighter than was typical at the time. The bayonet which went with it was cast as a single piece and was designed to fit over the muzzle, the rifle firing through the grip.

The bayonets were produced using the lost wax casting process and were produced as a single casting of six bayonets that were then separated and machined to the final design.

The bayonet was being seen by some armies at the time as obsolete, however the British had used the bayonet with the SLR in the Falklands just a few years before to some effect and felt there was still a place for it in the modern army. The SA80 pamphlet sets out the doctrine for the use of a bayonet in modern warfare:

When closing with the enemy at close quarters there may well be the occasion for hand to hand combat. The bayonet is issued specifically for this pur­pose. In most cases bayonets will be fixed in a final assault position just prior to fight­ing through an objective. Situations arise when it is not possible to shoot at the enemy. These could be, running out of ammunition, a stoppage during an assault, or the close proximity of a fellow soldier making a shot too dangerous. In these circumstances the use of the bayonet may be the only alternative. It can also have a demoralizing effect on the enemy.

The official description of the SA80 bayonet is:

The bayonet is shaped to produce good penetration when thrust, point first, into the body and is de­signed to part the ribs without embedding into the bone. It has a cutting edge which should be kept sharp; the curved part of the back of the bayonet must not be sharp­ened as this will reduce its rib parting ability. The recesses along the blade are blood channels to reduce any suction effect and enable a clean withdrawal from the body. The ribbed portion of the blade is for rope cutting.

There is a slot at the forward end for use with the scabbard.

The handle is shaped so that the bayonet can be used as a fighting knife; at the rear of the handle is the release catch which holds it onto the muzzle of the rifle. 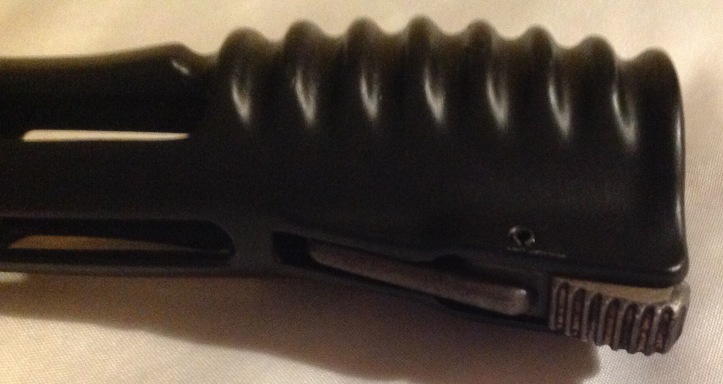 The handle is heavily ribbed to allow for grip when it is used as a fighting knife and the catch ensures that the cutouts in the handle will line up with the corresponding gas slots in the muzzle of the rifle: 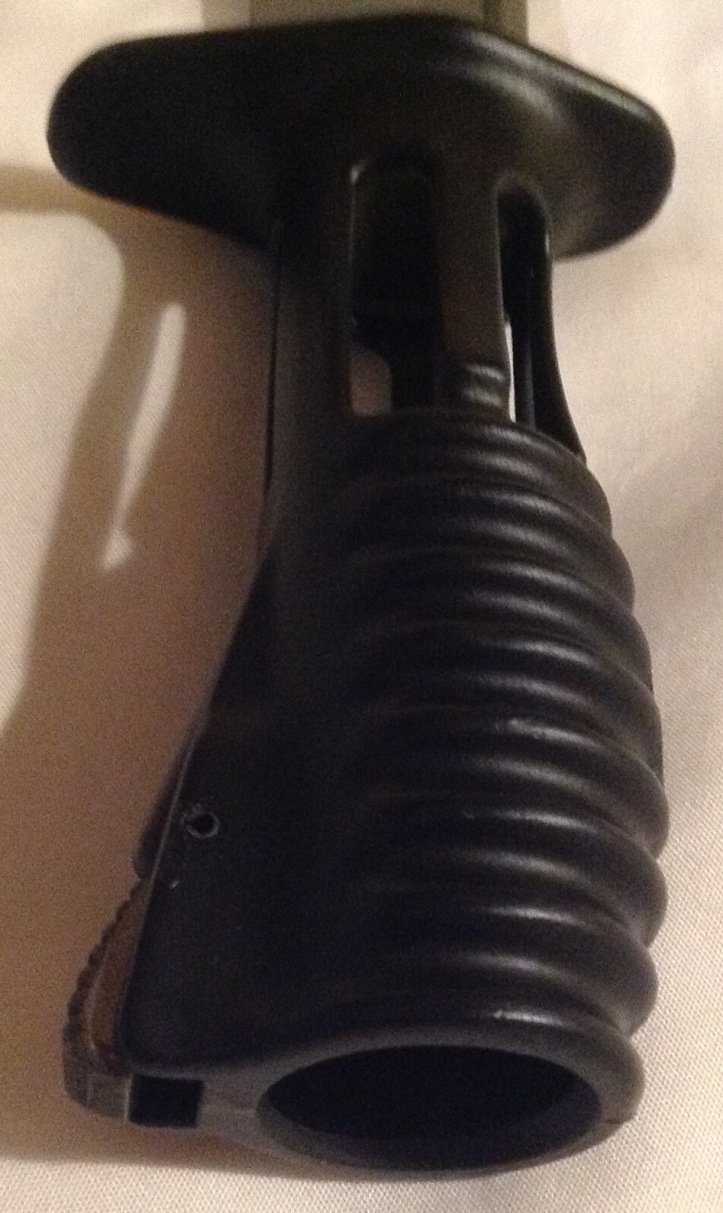 The quillion of the bayonet has a larger depth behind where the thumb would rest for a right-handed soldier using it as a fighting knife: 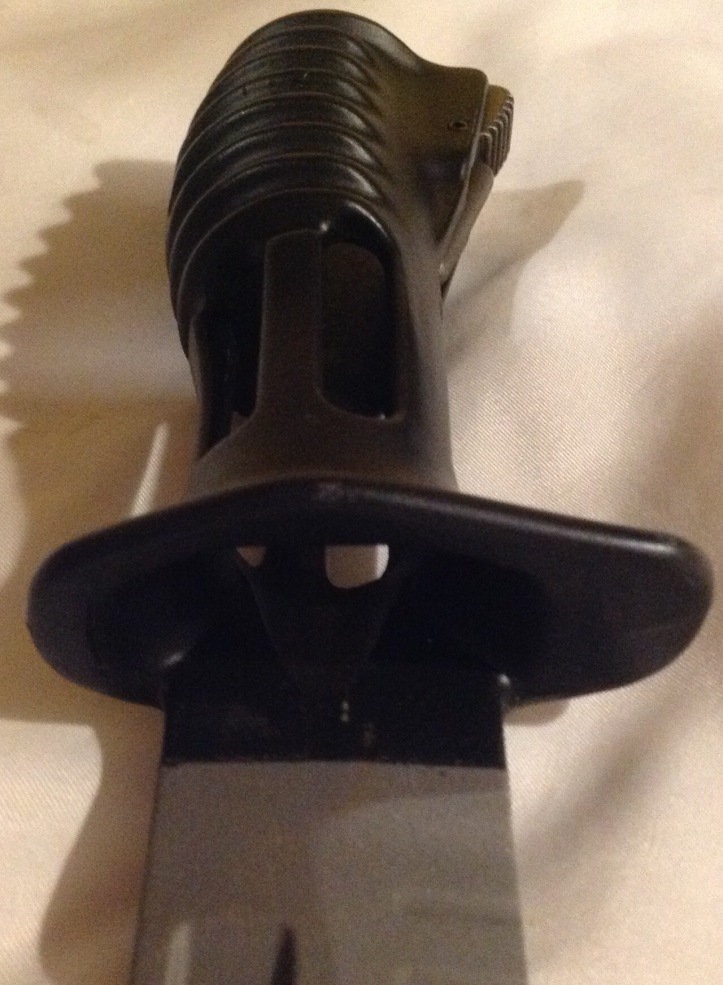 Using the bayonet with such a short rifle brings its own challenges, the following positions are illustrated by the pamphlet as the best ways to use the bayonet: 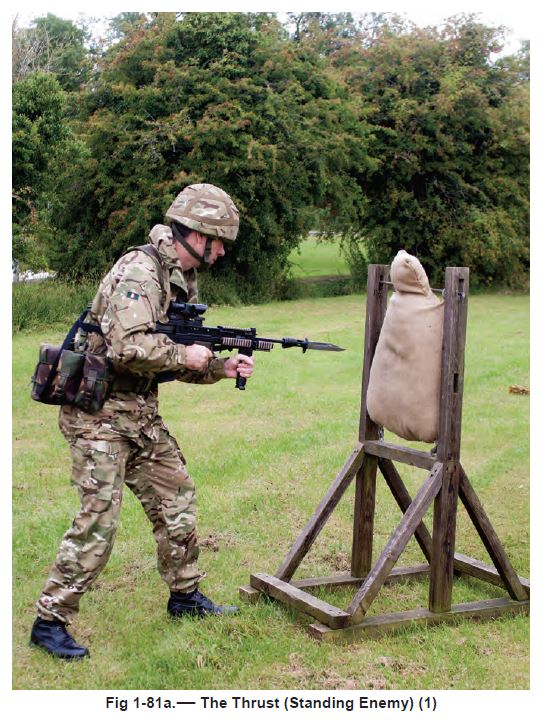 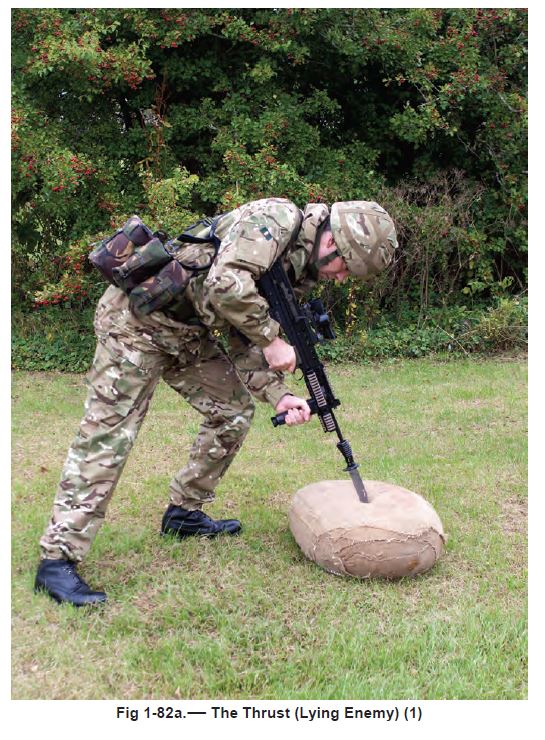 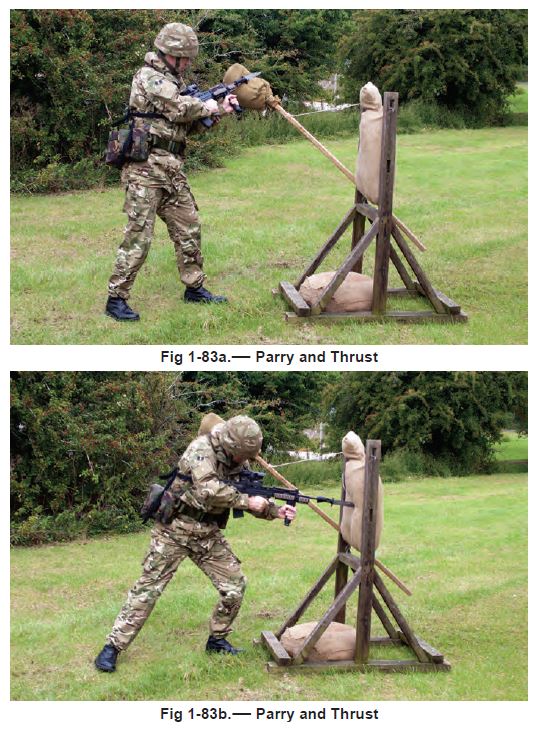