Tonight we come to the fifth and final post covering the RAF Aircraft cigarette cards published by Players in the late 1930s. I hope you have enjoyed these posts as much as I have, many of these aircraft are virtually forgotten now and I must confess to having a soft spot for the lumbering biplanes of the interwar period!

Designed for the Navy and Army Anti-Aircraft Batteries, this aeroplane made its first public appearance at the Royal Air Force Display at Hendon in June 1937. Although still officially unnamed, it is usually referred to as the “Queen Wasp”. The engine is an Armstrong Siddeley “Cheetah” air-cooled 7 clylinder radial. Performance details of this aircraft are still secret. Arrangements are made for the fitting of floats in place of the usual land undercarriage, enabling the aircraft to be used either as a landplane or seaplane.

The “Queen Bee” is virtually a standard D.H. “Tiger Moth” equipped as a radio-controlled pilotless aircraft for use as a gunnery target. Apart from the radio-control equipment, the “Queen Bee” is also fitted with catapulting points and slinging gear, and may be used either as a landplane or seaplane. The engine is a “Gipsy-Major” 4-cylinder inverted air-cooled motor of 130 h.p. Performance details are not available for publication. H.M. The king witnessed a demonstration of “Queen Bee” flying when he visited the Fleet in June, 1938.

This aircraft, which is designed for training, is a graceful low-wing monoplane, built by Airspeed Ltd., and fitted with two Armstrong Siddeley “Cheetah X” engines of 350 h.p. each. The equipment provides for training in navigation, bomb aiming and wireless operation. The “Oxford” has a wing span of 53 feet 3 inches and a top speed of 187 m.p.h. Its flight endurance is 5 hours. It is finished in bright yellow, the distinguishing colour of trainer aircraft. 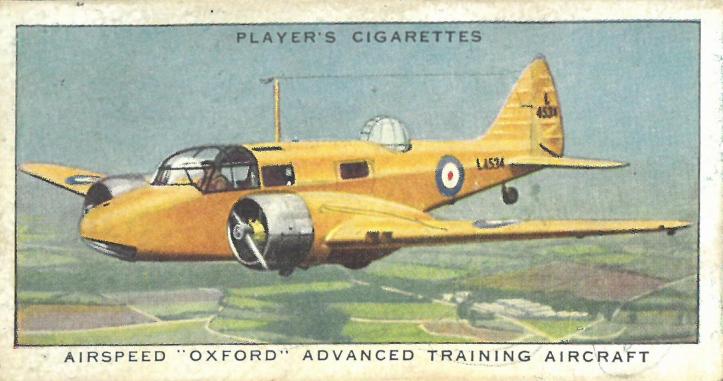 An adaptation of the well-known Avro “Tutor” specially equipped for navigational training in the Royal Air Force. Full cloud-flying equipment, blind-flying hood, etc., are provided. Except for this specialised equipment the “Prefect” is identical to the “Tutor”. An Armstrong-Siddeley “Lynx” engine of 215 h.p. is fitted. The aircraft has a wing span of 34 feet, a length of 26 feet 6 inches and a height of 9 feet 7 inches.

A two-seater equal span single-bay training aircraft, used for elementary training. Complete dual control is fitted, and a 215 h.p. Armstrong Siddeley “Lynx” 7-cylinder radial air cooled engine provides a maximum speed of 122 m.p.h. A seaplane version of this aircraft, known as the “Seatutor” is also built, and is almost identical to the landplane apart from having a slightly lower performance. The “Tutor” has a wing span of 34 feet, a length of 26 feet 6 inches and a height of 9 feet 7 inches.

This aeroplane was designed as an efficient elementrary and intermediate training biplane, but in addition it is used in the Service for communication duties. Complete dual control is fitted and, if desired, floats may be employed in lieu of wheels, rendering the aircraft suitable for seaplane training. A D.H. “Gipsy Major” 4-cylinder-in-line inverted air cooled engine is installed, and in the case of the landplane produces a maximum speed of about 109 m.p.h. The “Tiger Moth” has a wing span of 29 feet 4 inches, a length of 23 feet 11 inches and a height of 8 feet 9 ½ inches. 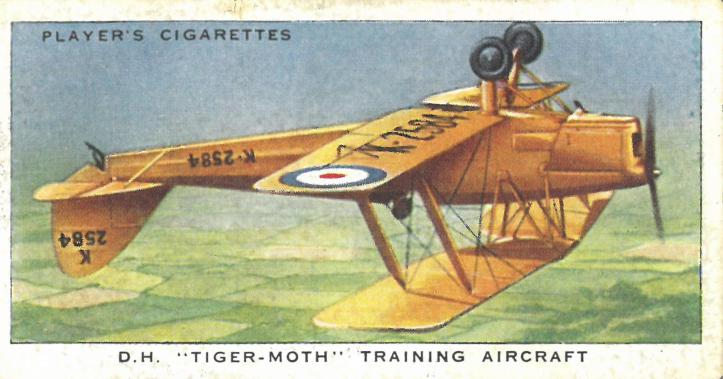 A low wing trainer monoplane built by Phillips & Powis, the Miles “Magister” is fitted with a de Havilland “Gipsy Major” engine of 130 h.p. Its lines are noticeably graceful. The wing span is 33 feet 10 inches and the length 25 feet 3 inches. The cockpits are open and are set tandem fashion. There are full controls and instruments including blind-flying equipment. Like other trainers, the “Magister” is finished in a bright shade of yellow. Trainer aircraft are specially designed and fitted for the highly important functions which they perform. 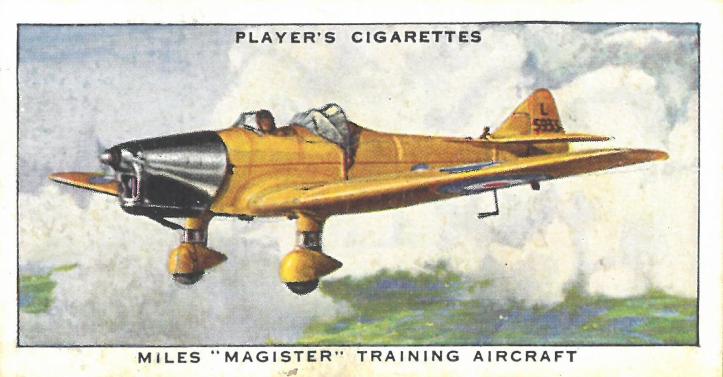 This low-wing cantilever monoplane is a high speed trainer built by Phillips & Powis. It mounts a Rolls Royce “Kestrel XVI” engine of a maximum output of 745 h.p. The two seats are placed tandem and there are dual controls. The undercarriage is retractable, while a feature of the design is the unusually thick wing. The machine has a top speed of 295 m.p.h. Modern high-speed flying demands a special technique which this aircraft is designed to teach, but it can also be employed as a general purpose type suitable for fighting, light bombing or reconnaissance.

Originally designed as a bomber, this aeroplane is now used for parachute training. An unusual feature of the design is the double set of landing wheels. The aircraft is fitted with two Napier “Lion” 12 cylinder “W” type liquid-cooled engines mounted between the wing stuts. The dimensions of the “Virginia” are imposing- wing span 87 feet 8 inches, length 62 feet 3 inches, heigh 17 feet 9 inches. A comparison of the “Virginia” with more recent types of bomber (e.g. “Battle” and “Wellesley”) shows the rapid advance made in general design.

This type is a development of the “Victoria” V and VI bomber transport aeroplanes, and is fitted with two Bristol “Pegasus” II L.3 engines. Provision is made for carrying a spare engine on the bottom inner port plane. The aircraft is 59 feet long, and has a wingspan of 87 feet 7 inches. When used for transport the “Valentia” carries 21 troops besides a crew of 2, including the pilot. It has a range of about 650 miles and has been largely used for moving troops expeditiously over rough country. Most of this type are stationed abroad.