A few weeks back we looked at a blue and orange Royal Navy deck crew cloth helmet here. Since then I have managed to add a yellow example to my collection which we will be taking a closer look at tonight. As mentioned previously, the yellow helmet was issued to aircraft handlers and directors. This helmet is virtually identical to the previous example apart from its colour, therefore tonight’s post will mostly focus on photographs of this piece, for further information please refer to the earlier post. 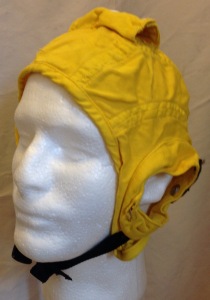 One point to note is that this example is actually dated, with a faint /|\ mark and date of 1963 visible:

The job role of aircraft handler is still in existence in the Royal Navy and without carriers they have been employed at the various Royal Navy Air Stations and more importantly the commando ships such as Bulwark and Ocean. The following is a useful description of the role and training undertaken by a modern aircraft handler by someone in the branch:

Your training as an Aircraft Handler will be split into two phases,

1.Fire-Fighting, you will spend approximately 6 months of training in this field, it covers all aspects of domestic and aircraft crash rescue procedures in line with their civilian counterparts, although watch this space with regard to the domestic phase. You will receive civilian recognised qualifications which is relatively new. So if you don’t like heights, confined space breathing apparatus or the physical nature of firefighting in general then this is definitely not for you.

2. Aircraft Handling is approximately three months and in essence teaches you how to move aircraft around a flight deck by various means and how to remain safe and unharmed in arguably the most hazardous area of any ship. You will be a specialist at aircraft moves at sea, any monkey can be trained to push an aircraft ashore hence why they allow squadron AET’s to do this task and generally you do not do this ashore unless showing the AET’s how to do it correctly.

When you have completed training you will spend time on the fire station at one of two Air Stations, Culdrose in Cornwall or Yeovilton in Somerset. You will be a piss boy at first but with experience you will be moved on to drive the fire vehicles and gain all the driving qualifications such as LGV, Hazmat etc.

When the QE class carriers are being sailed around the world in the near future you will be working on the deck with all types of aircraft, ours and foreign. Believe me this is the only area of the ship people will be remotely interested in. It’s also a small tight knit branch which has a band of brothers attitude which is quite often envied by other branches and rightly so.