Today we are going to have a brief look at my 1944 pattern small pack and its contents. The 44 pattern webbing was in use for several decades, so I have taken the Malayan Emergency as my timeframe for the contents I collect. I must stress now that this is still a work in progress and there are many items of small kit I am looking for- 44 pattern knife fork and spoon, jungle green jumper etc. Despite this I feel I have made a good start and the jungle kit shown below is less familiar than the wartime personal kit so hopefully this will still be of interest: 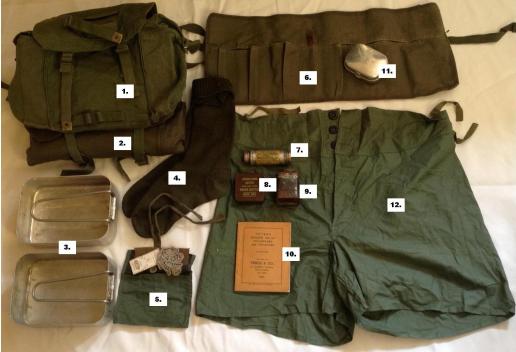 2. Waterproof cape- the waterproof cape issued with 44 pattern webbing was identical to its wartime equivalent, but made of green rubberised canvas rather than tan. It has buttons on the front and a high collar and is designed to be worn over uniform and equipment.

3. Mess Tins- The 1944 pattern jungle equipment reintroduced aluminium mess tins that had been phased out at the start of the war due to metal shortages. These have proved to be the longest lasting piece of equipment introduced as they are still being manufactured and issued today.

4. Jungle Socks- These socks are made of green rot-proof wool. It was found that normal socks disintegrated very quickly in the hot humid climate of the jungle and these were an attempt to remedy the problem. It was not entirely successful, but they did last longer than traditional woollen socks.

5. Housewife- Like the rest of the equipment, the housewife was produced in waterproofed green material. Apart form the change of material, the design was pretty similar to that used since before the First World War.

6. Wash roll- The 1944 pattern webbing and personal kit introduced an entirely new design of wash roll. Larger than its predecessor, this roll has pockets for various items and the long cords at either end allow it to be tied around the waist if needed.

8. Water Sterilisation Kit- This little tin contains two bottles of chemical tablets, one is added to water to sterilise it and the other to remove the horrid taste left by the first. These were used in combination with the Millbank bag we looked at here to ensure potable drinking water in the jungle.

9. Foot Powder- Dry feet are essential to prevent sores and damage that could incapacitate a soldier. Applications of antiseptic foot powder were to be applied to dried feet as often as possible to ensure levels of hygiene. This square tin is most commonly associated with the 1944 pattern equipment, but I have seen no conclusive evidence to prove it is part of the set.

10. Malay-English Phrase Book- This little book, published in 1951, has a range of useful Malay phrases, including many geared towards the visiting British soldier. It was published in Singapore and would probably have been bought by troops and police arriving and waiting trans-shipment to the Malayan Emergency.

11. Soap Tin- This little aluminium soap tin was introduced along with the rest of the 1944 pattern equipment. It is marked CWS (Co-Operative Wholesale Society) and has a /|\ mark and a date of 1945. These are very common and are frequently seen in kit set ups for WW2, but probably did not reach many troops during that conflict.

12. Jungle Boxer Shorts- This set of underwear is made of a very light green cotton, with rubber buttons and ties in the waist to adjust. It is an incredibly loose fit and this is probably deliberate to minimise chafing that could cause debilitating jungle sores.