As previously touched upon in the post on the South African small pack, South Africa had very limited production capacity for modern woven cotton webbing. The country started the war with most cotton equipment being imported from abroad and very limited quantities of it available. One area the country did have capacity in was leather manufacturing. Leather was cheap and plentiful in the region due to the rural economy of much of the country, it was also durable and easily worked to make into equipment.

Perhaps because of these reasons South Africa continued to manufacture 1903 pattern leather bandolier equipment well into the Second World War. Tonight’s object is a South African made leather bayonet frog. Soldiers have used bayonets since the eighteenth century, originally because muskets were single shot and another form of weapon was needed for after a shot ahd been fired. By the twentieth century this was less of an issue, however bayonets were essential in close quarter fighting and all troops equipped with rifles were issued with one. The British Empire used a 12 inch sword bayonet and of course needed a way of attaching this to their equipment.

The frog itself is made of brown leather with a loop at the top for a belt to pass through: 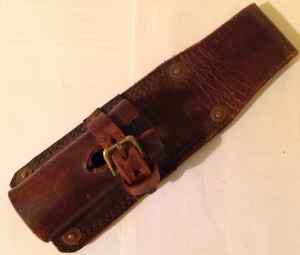 There is a hole through which the scabbard can pass and a cut out for the scabbard fastener to slot into, with a buckle to secure everything into place: 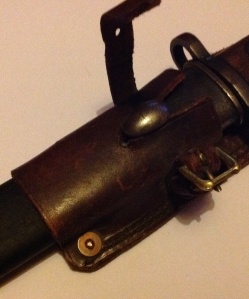 It is of sewn and rivetted construction: 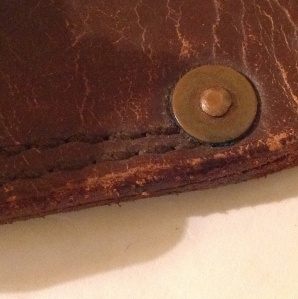 On the rear is a manufacturer’s stamp for E.B. Joffett of Johannesburg, with a date of 1940: 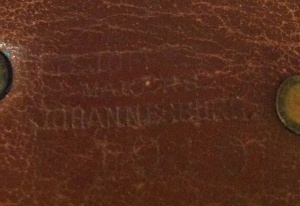 There is also the South African acceptance mark of a /|\ inside a ‘U’: 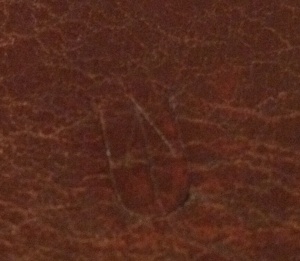 Within a couple of years the use of leather equipment, even in South Africa, would be replaced with more modern cotton webbing. However at a time of acute pressure, the continued use of leather was a helpful stopgap that allowed troops to be equipped and trained whilst manufacturing capacity was increased.