Tonight’s object was purchased from a seller with a selection of RAF kit that seems to have belonged to a member of 201 Squadron, an RAF Nimrod squadron that served throughout the Cold War on long range reconnaissance patrols. The seller had three different pairs of flight crew gloves, and I made sure I picked up the pair in nicest condition:

These gloves are made of a green fabric, possibly a poly cotton blend, with a leather palm for added grip:

The gloves feature a knitted cuff at the wrists to help keep cold air out, essential at altitude in case of a loss of pressure:

The inside of the gloves have a thin layer of white padding to help make them warmer:

A label is sewn inside with the gloves NSN number on it: 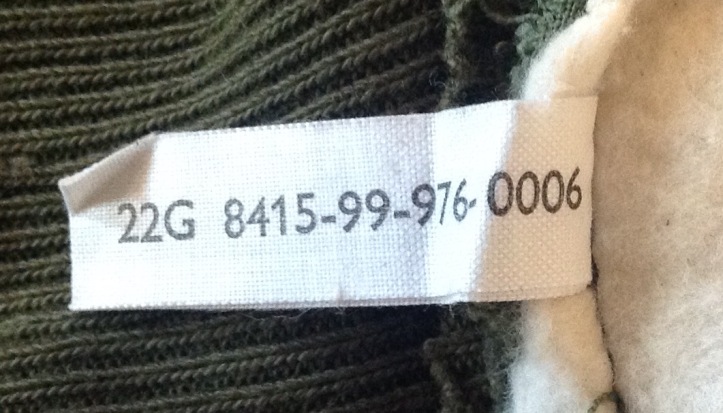 And the size and year of manufacture, here 1982:

The gloves were manufactured by a company called ‘Burfield’. I believe that this is a small specialist glove maker based out of Martock, the Martock Local History group profiled the company in 2010:

Established in 1944, Burfields & Co. is one of only two surviving glove manufacturers in an area that once boasted 38. The hand-painted sign welcoming visitors is a relic of that bygone age. It reads: “This is where gloves of quality and superlative design are manufactured by Burfields and the Martock Glove Co.” In a rabbit warren of buildings at the end of a small lane, the main factory sits beside the old fire station which now acts as the Burfields warehouse.

Burfields is a business where “family run” is key to the company’s success. The company’s founder, Norman Burfield, took on his first employee, Geoffrey Cornelius, in 1945. Today, the company is run by Matthew Burfield, Norman’s grandson, and Geoffrey, who joined at the age of 14, only retired from the business in 2003. His younger brothers, Richard and Martin, still work at the factory. Burfields’ manufacturing expertise depends on such continuity, its collective knowledge passed down from generation to generation and bolstered by close family ties… As we sit in Matthew’s office, he explains how he turns the company’s traditions and heritage to his customer’s advantage.

The shelves of Matthew’s office heave with boxes of samples and prototypes, pattern designs and fits that represent decades of experience. No sooner have we been welcomed in than Clive, Matthew’s father and who ran the business before him, shows us a beautiful goatskin hide that has arrived the same day from Pittards, the tanners based only a few miles up the road, in Yeovil.

This particular piece of leather will be used for making Rapha Grand Tour Gloves and Town Gloves. Having the tanners nearby ensures only the finest leather is used, explains Matthew and this, in turn, allows Burfields to turn out products of the very highest quality. Glove manufacturing is a centuries-old craft and Burfields retains many of its artisan traditions. The cutters (those who work and cut the leather for stitching) inspect each and every piece of skin in a designated ‘quarantine’ area. Being a natural product, the texture and movement of the leather can vary greatly and working leather is something that can’t be learnt overnight.

Matthew shows us a piece of goatskin waiting to be cut. Goatskin has a strong grain and is very supple. To produce the highest quality product, the cutter must understand and manage the movement of the leather so that it will perform perfectly once the glove has been made. As each skin has a different character, cutters also need to ensure that the colour and grain of the various glove parts match and that there are no skin faults or blemishes.

Cutter Richard Cornelius is the youngest of the three Cornelius brothers. He started in the trade at 16, was apprentice to his brother, Geoffrey, and has himself been at Burfields for 49 years. As he sharpens his shears by hand (think spring-loaded sheep shears but with longer blades), tools that have clearly seen many years of service, Richard tells me it takes three years to learn how to handle the different weights and types of leather. “You need to learn by feel,” he says, “learn how to pull and work with the run of the grain.” Perhaps fittingly, making the highest quality leather gloves relies on genuine handcraft.

Richard unwraps a piece of black goatskin from inside a wet cloth; the leather is dampened for a few hours, making it easier to work and stretch. This piece is destined to become a pair of black Rapha Grand Tour Gloves. He moves the skin one way and then the next, with the urgency and agility of a pizza chef stretching dough. The degree of stretch within the leather is very important. It is the cutter’s job to ensure every piece of a glove has, within the leather’s grain, the same stretch. To allow the glove to bend around the hand, the leather must have something extra, a quality Richard refers to as “hidden stretch”, something not necessarily apparent when the leather is relaxed. A size large glove, for example, may have as much as 2 ¼ inches of this ‘hidden leather’, which is needed to transform a flat, 2D pattern, into a working 3D glove.

To create the basic hand shape, Richard uses a template to cut round the leather – the sound and expert action of the shears are both very satisfying. He then ‘stubs’ the ends, working out the stretch in the fingers, before making a knick where the thumb component will be sewn on. The pattern at this stage looks something like a leather flannel but is nevertheless still examined by the chief foreman before being stamped with a serial number on the underside. Each glove has numerous separate components, including clasps, fasteners and linings. The thumbs will be cut from the same skin as the main hand pattern and stamped with a corresponding serial number so they can be paired later to keep the consistency of grain and colour.

The flat leather is then put on a ‘knife’, a metal template armed with various blades and spikes for making perforations and other details. A pneumatic press then punches down, something like a robotic biscuit cutter, creating a perfectly formed glove pattern ready to be sewn together.

Matthew leads us into the sewing room. We walk along aged, creaking floorboards to find several ladies deep in concentration. They are performing technical stitch work, using ‘post machines’ which allow the operator to move 360 degrees around the stitch work. With only French chalk lines as a guide, their dexterity and freehand skills are impressive and the room resounds to the whir of old Singer sewing machines, purring in their weighty, cast iron beds. We watch as some Rapha Town Gloves are stitched inside out before the thumb piece is attached. Barbara, one of the machinists, explains that the Town Gloves are difficult to stitch because of the high-density padding and the curved pattern stitch lines on the palm. She appears to be rising to the challenge, however, and Burfields are renowned for technical finishing (they supply various gloves to specialist sections of the British military).

The strains of ‘Blue Velvet’ drift from Matthew’s office as we move from the noisier end of the factory to the serene calm of the finishing department. Robotic-looking hands (think Fritz Lang’s Metropolis) thrust from a workbench. These are glove irons. Electrically heated and of varying sizes, they are used to press the gloves before they are inspected (again) before being packed and moved to the old fire station ready to be shipped. Like the Singer sewing machines, the glove irons seem to be relics of a bygone era, which have survived because their design has not yet been bettered. In fact, throughout the Burfields factory there is little sign of ‘modern’ technology, save for the computer in the receptionist’s office.