Earlier this year we took a look at a War Department marked radio valve. The War Department were of course not the only service to use valves as part of their electronic equipment in this emerging field during the Second World War and the Royal Air Force also used valves extensively in both simple radios and more complex electronic devices such as radar and navigation equipment. These valves are also marked up, but show ownership by the Air Ministry and it is one of these valves we have tonight:

This large silvered valve has a Bakelite base plug with seven pins on the bottom:

The main valve is marked up with the A ‘crown’ M mark of the Air Ministry: 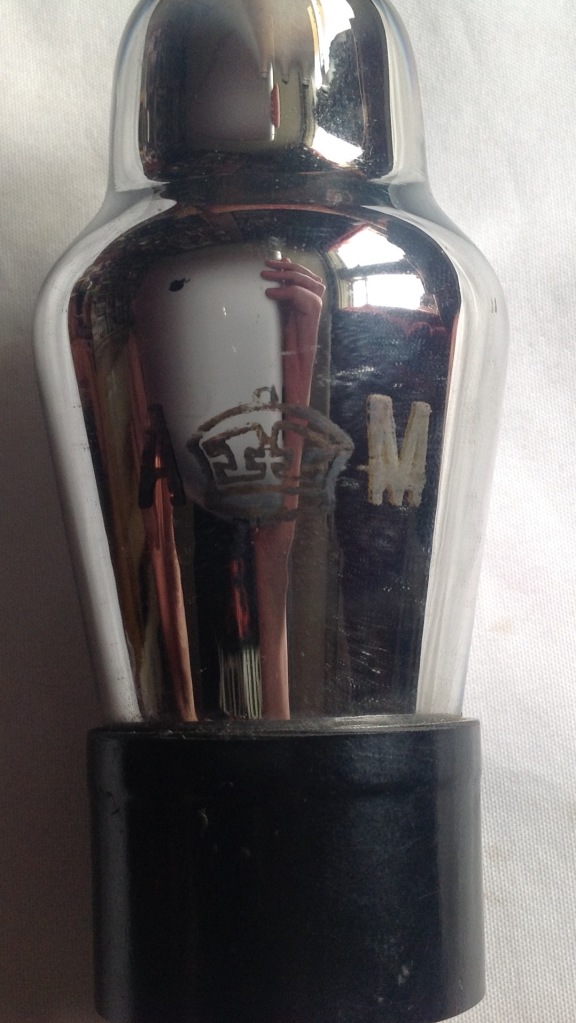 This stores code is equivalent to the civilian designation 220B and the online “Valve Museum” explains its use:

The 220B is a double triode audio output valve from the early 1930s. Like similar valves this was designed to offer reasonable volume at minimum consumption from dry cell HT batteries by being operated as a Class B push-pull stage. Pure Class B suffers from cross-over distortion as the initial conduction region of the valves operating slope is non linear.

The site indicates that the design was introduced in 1933 and I suspect continued to be used in radio equipment throughout the Second World War, when this valve was probably manufactured.

After this I was posted to Cranwell and started 6 week courses for Radio Telephony Operators, both men and women. As there were only 6 instructors we worked double shifts starting at 6a.m. and the courses went on until 10p.m. but we did get leave after each course. As the war progressed equipment improved and VHF equipment was brought out so the range became greater and I also had to instruct on this equipment. At the end of each course was a Trade Testing Board and I used to serve on this as well. I had been made a Corporal and my Morse improved to 30 words per minute. Eventually I had to instruct all nationalities from the Empire Air Training Scheme to teach them Radio operating and theory for operating in the air. The equipment was old but one day there arrived in my laboratory a new transmitter and receiver made by Marconi. My instructions were to install it and be ready to instruct officers and staff on its uses. Within 4 hours of receiving it I gave a lecture on it. After that I instructed on it most of the time going to stations with new aircraft such as Lancasters and Halifaxes as the operational crews didn’t know how to use it. In 1942 I was posted to RAF Bobbington as a Sergeant to an officers and crew training unit where the men came for training on the Marconi equipment. I have photographs of classes taken in front of aircraft whom I instructed prior to going into operations.