The Kestrel patrol boot was a medium weight set of boots issued to soldiers as a general purpose boot for short to medium patrols and exercises. It was not as good in cold weather as arctic boots, nor designed for use in extremely hot temperatures, but fitted into the mid-range where most exercises and indeed combat was expected to occur. These boots were designed to be lighter weight and more comfortable than earlier designs and incorporated fabric panels for breathability and robust soles for marching in. The boots were also produced in both brown and black, and it is the black pair we are looking at tonight: 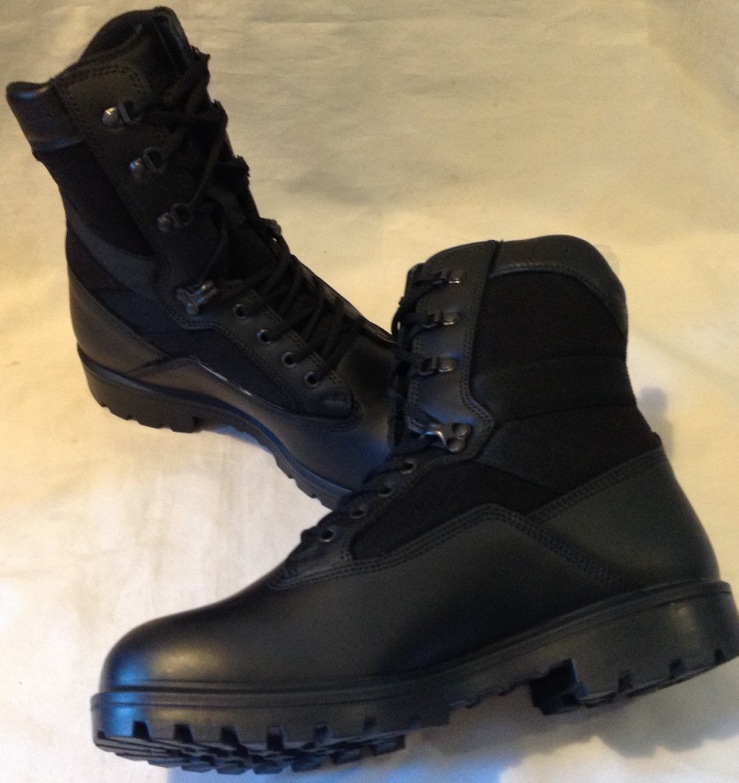 The boots were issued in a standard cardboard shoe box:

On the outside a stores label has been attached with NSN number and sizing:

Opening the box it can be seen that packaged in with the boots are a number of accessories:

These include insoles and spare laces:

A tube of boot polish:

And an instruction leaflet:

The boots themselves feature a deeply cleated rubber sole:

And fabric panels let into the uppers to make the boots both softer and more comfortable and to aid the movement of air so the wearer’s feet don’t overheat:

The boots fasten up the front with laces in a mixture of standard lace holes and quick lace hooks:

A stores label is sewn into the tongue of each boot:

One cadet user has given a detailed assessment of this pattern of boot that makes interesting reading, covering its use by cadets in detail:

Looking at them they looked a good pair of boots and felt very light when compared to the good old assault boots that were issued in the past – not a bad thing at all!

Looking at MOD literature, the YDS Kestrel boots are a patrol boot which means they are suited to situations where the threat of combat is medium to low with a temperature range of -10º to +35º. Which makes them ideal for cadet use!

It is also recommended that they are used with gaiters in wet weather which is something to keep in mind, although you don’t need to rush out a buy a pair.

First test was how they fit. After adjusting the laces, an easy job with the lacing loops on the upper part of the boot and the lace locks as well, I put them on had a quick walk around the house. No problems at all and no squeaking or creaking either!

I decided to put them through a series of different environments to simulate the sort of things you’d come across in cadets: a two mile road walk, a two mile walk through muddy fields and woodland close to where I live, a two mile walk with a 10kg pack on and lastly a quick go on the outdoor ‘gym’ trail in the local park.

On the first two mile walk I found the boots to be comfortable and I didn’t feel that my feet got ‘hot’ while walking. I stopped after about half a mile to adjust the laces – something I do with every pair of boots when heading out to ensure they fit snugly without rubbing.

At the end I had no rubbing or pinching on my feet and they still fitted nicely.

Next up was a trek through a muddy field and through a local woodland. Now looking at the MOD advice I did this with gaiters on and again I found the boots comfortable to walk in.

One thing I did note was that the soles held a lot of mud, but I purposely went through all the muddy patches to see how they did at the extreme end of muddy so it’s not a surprise they clogged up.

Now I didn’t go through any puddles deeper than about 50mm and in all honesty I avoided trying to wade through a stream as I know the fabric upper would get my feet wet and to be frank I don’t think doing that would be a true reflection of how they perform on cadet type activities.

After bit of a clean I headed out for a walk with a 10kg pack on to see how much support the boots offered and how comfortable they were walking in with a little weight on.

Again I thought they were very comfortable and the high leg provided a good level of support for my ankle with no rubbing etc. and the boot flexed enough to allow my feet to spread slightly with weight as well.

Lastly I headed out to the outdoor gym trail in the local park and went over the various obstacles to stretch and twist my feet to see how supportive these boots are over obstacles and the like.

As I expected having gone over the last few tests with them they were fine, comfortable and supportive with the fabric upper coming into its own moving and flexing with ease.

So after putting the boots through a few tests and wearing them generally for a while I’d have to sum up by saying that I think these are a good cadet boot.

Yes they have a fabric upper which means wading through water may be an issue but in all honesty that’s not something that will happen a lot, if at all while on cadet activities. But that fabric upper also makes them comfy and easy to ‘break in’ as well – good news for cadet feet!

They are comfortable to walk and march in and clean up easily which is a big plus.