Airgraphs have appeared a number of times on the blog over the years, often with elaborate drawn designs on them. Tonight’s example is no exception and was sent from a soldier serving as part of South East Asia Command (SEAC): 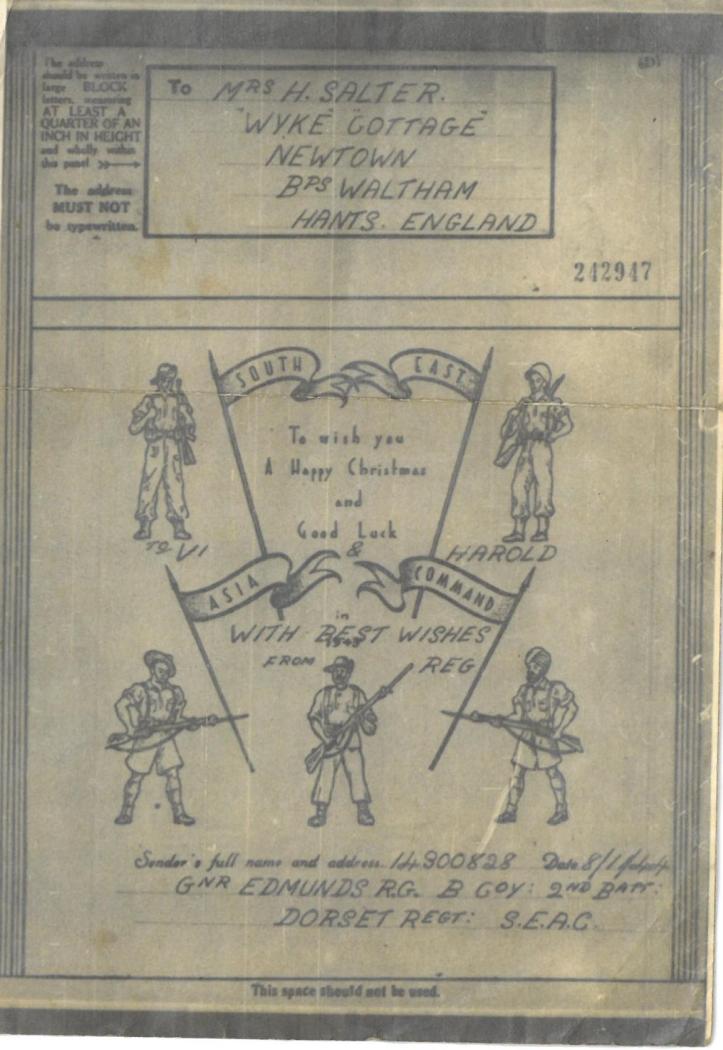 Very unusually, this airgraph has survived with its original envelope intact:

The airgraph, after it had been printed back to a readable size was placed in this envelope before being posted to the recipient. When airgraphs were introduced, the Daily Mail explained how the new service would work:

A photographic method has been invented by which an all-the-way-by-air mail service, far cheaper and quicker than the normal, is to be started at once for letters between British troops in the Middle East and their relations and friends at home.

This “airgraph” service, the first of its kind in the world, was announced by the Postmaster-General yesterday. Letters sent by it will cost only 3d, and take less than a fortnight to arrive…

The secret of this sweeping change is the speed and cost of better transmission is the reduction of weight- by photography.

Weight is always the problem in sending freight by air. Four thousand five hundred normal airmail letters weight one and a half hundredweight- which is why in these times, they have to travel some of the way by sea.

The same number of airgraph “letters” will weight just one pound.

Because, of course, the original you or your soldier friend writes will not make the journey. It will be photographed and the negative about ½ inch wide and ¾ inch long will travel by plane in company with thousands of similar negatives…

On arrival this will be printed and the “letter” received will be, in effect, a photostatic copy of the original.

This example was sent in 1944 to a woman living in Bishop’s Waltham:

The main picture has a selection of soldiers from the South East Asian command including American, Indian and Ghurka troops:

The sender was a Gunner Reginald Edmunds of the Dorset Regiment:

There seems to be an inordinate array of these airgraphs out there to collect, often illustrated and with personal messages which make them a fascinating topic for the militaria collector.