The development of powered flight before the Great War was to change the world forever and the general public quickly gained an insatiable appetite for anything to do with aircraft. This was an obvious subject matter for postcard manufacturers and together with the public’s natural patriotism made the Royal Flying Corps and obvious choice to produce postcards about.

This week’s image dates from the very start of the First World War and is titled ‘The Royal Flying Corps at X….X’: 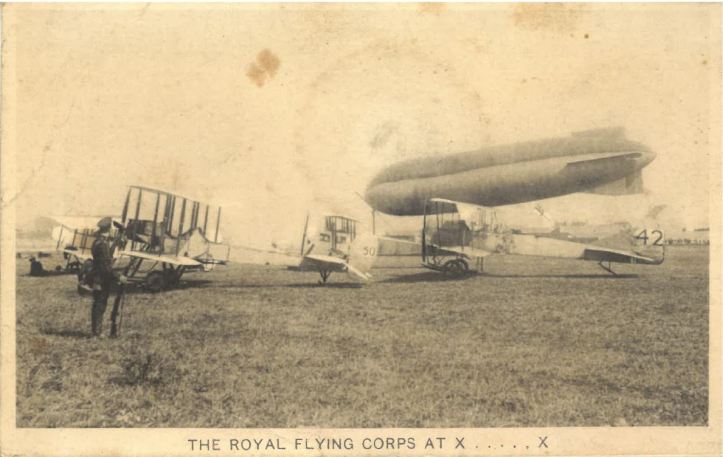 In the foreground can be seen a soldier keeping guard of the aircraft:

Behind can be seen a pair of aircraft:

These have been identified by a friend as being most likely BE2 aircraft. This was a single engined, two man crewed training aircraft introduced in 1912 and used throughout the First World War. It was initially used as a front-line reconnaissance aircraft and light bomber; modified as a single-seater it proved effective as a night fighter, destroying several German airships.

By late 1915, the B.E.2 was proving inadequate in defending itself against German fighters such as the then new Fokker Eindecker, leading to increased losses during the period known as the Fokker Scourge. Although by now obsolete, it had to remain in front-line service while suitable replacements were designed, tested and brought into service. Following its belated withdrawal from operations, the type served in various second line capacities, seeing use as a trainer and communications aircraft, as well as performing anti-submarine coastal patrol duties.

Behind these aircraft can be seen a large airship:

The white ensign flying beneath shows this airship belongs to the RNAS rather than the RFC. Britain never used airships to the same extent as Germany and its Zepplins, however they saw sterling service patrolling the channel and on anti-submarine patrols.