The individual protection kit was a small shelter that was issued to troops in the 1980s. It had a waterproof sheet, pegs and cord and allowed a waterproof roof to be fitted over a foxhole or two man trench to improvise a weatherproof sleeping position in the field.

The IPK was issued in a small green sealed package:

The outside of the packet had details of the contents, year of manufacture (1986) and an NSN number: 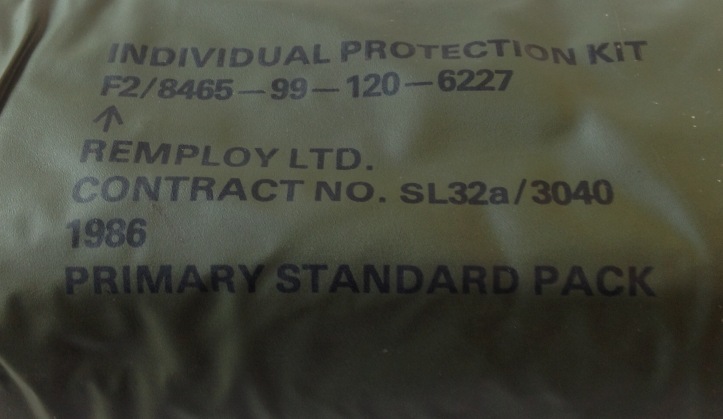 Inside this outer package was another, clear, bag with the actual IPK in:

Opening this revealed a dark green waterproof sheet and a set of pegs and cord:

The cord is made of white nylon and six aluminium tubular pegs are included:

An instruction card is wrapped around the shelter and has details of how to assemble both a single shelter:

And, by combining with another man’s IPK, how to make a two man shelter: 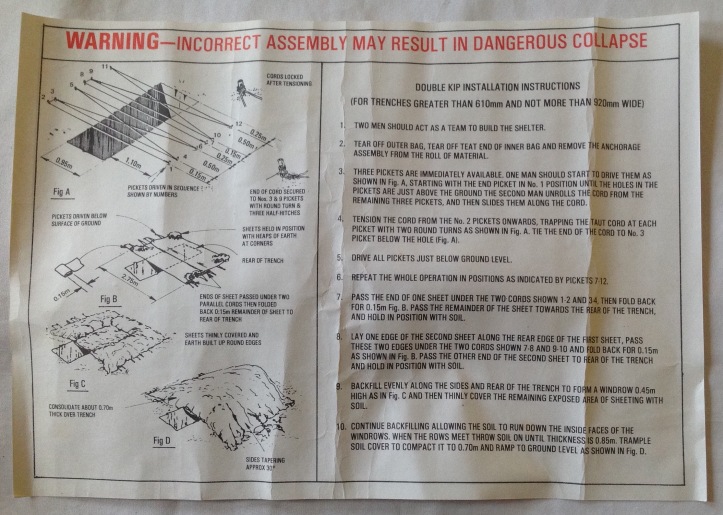 These shelters were quite effective if assembled correctly, but never hugely popular with squaddies:

I made my first acquaintance with the art of erecting one on STANTA in the first defensive exercise at Sandhurst and learned that with practice it was possible to assemble one that did not cave in or bulge threateningly. The IPK was compulsory on many defensive exercises in the early 1980s. Undoubtedly they could provide 18″ of overhead cover, the minimum to ward off splinters. However the result did not offer any confidence of surviving the attentions of 3rd Shock Army.

In BAOR I built a few trenches (stage2) and used the IPK for the shelter half, it did work but I never felt completely happy underneath it. Most of the time we supplemented the white cord and pegs with any branches you could hack out of the local forestry. As for driving a land rover over it! Well I suppose you could if it was all put together as the diagram, but half the time we did it in the dark and they mostly ended up looking like a big pile of shit.