It is said that every author has a ‘Magnus opus’ in them; that one masterpiece that eclipses all their other work and stands as the crowning achievement of their career. Badges on Battledress is that book for Jon Mills, an author we have reviewed several times before on the blog.

Badges on Battledress is a two volume book covering the cloth insignia worn on Battledress uniforms from the start of World War II until the uniform was dropped on the 1960s. These badges were both officially sanctioned and privately purchased and were worn on the sleeves by numerous different units of both British and Empire forces. Between the two volumes this topic stretches to fill over 1200 pages and these books are likely to remain the definitive work on the subject for decades to come. Over 6000 images fill the volumes, a mixture of modern photographs of the badges themselves and period photographs showing troops wearing some of them. The quality of the images is excellent throughout as you would expect from a book of this sort.

Accompanying the images is a well written text that provides background on the units wearing the badges, if possible details of when and where badges were introduced as well as a wider information on the official machinations surrounding military insignia, the manufacturers of the badges and other anecdotes as they apply to military insignia. This makes for an enjoyable read, with individual badges signposted in the text by the use of numbers that point the reader directly to the specific badge. If there is any shortcoming with the book it is this as sometimes a number refers to an example hundreds of pages away from the text or indeed in the other volume. I am unsure if there is actually any way round this, and when doing specific research it is not a problem, however if you are just browsing the text it can be a little distracting. There are also occasionally slight problems with the numb reign itself where the text is a digit or two out from the images referenced- again this is very forgive able given the size and scope of the book and it is easy to work around as it is pretty obvious the text is referring to the next badge along. 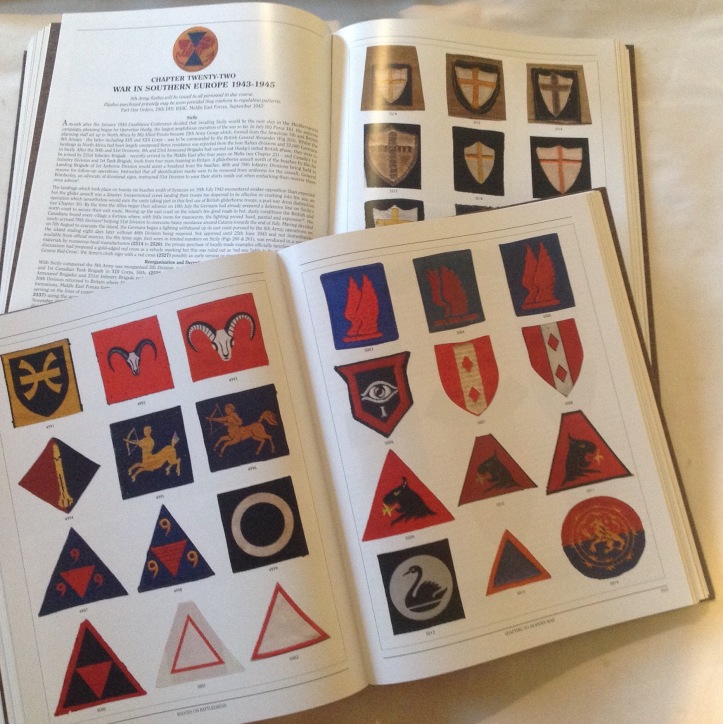 The book also covers the post war period, with insignia worn by the army, WAC and TA throughout the 1950s and 1960s. This is the first work to cover this subject since Cole’s short book published over sixty years ago. The books do not cover the Home Guard (which Mills has already covered in his book on the Home Guard) or the cadet forces, but the books are already massively long without these units so this is an entirely sensible choice and perhaps we will be lucky enough to get an accompanying volume on cadet insignia in a few years time.

It is fair to say that these volumes will be the definitive text on this subject for many years to come. They are not cheap, costing £150 plus postage for the two volumes, but their size and scope make them exceptional value for money and if you are a badge collector, researcher of just find the subject of military heraldry interesting I would urge you to pick up a copy. I suspect that these will not be reprinted and once the original print run has sold out I would suspect the secondary prices will climb to ridiculous levels so buy while you can. Copies can be purchased direct from the author by emailing bob19391967@yahoo.co.uk