Tonight’s item is in desperate need of restoration and is in very poor condition, however it is a very interesting object so I am including it now, before I replace the rusted metal and repaint the exterior which will of course obliterate the remains of the original marking. At first glance this wooden box looks like an ammunition box:

It has the same wooden and metal construction as the H51 case we looked at here. It is however longer and was originally used for carrying individual insecticide sprayers. The box is made of thin plywood, with metal reinforcing strips around all the edges. The lid is a separate piece and is secured with a pair of wire spring clips at each end:

A folding metal handle is included for carrying the case: 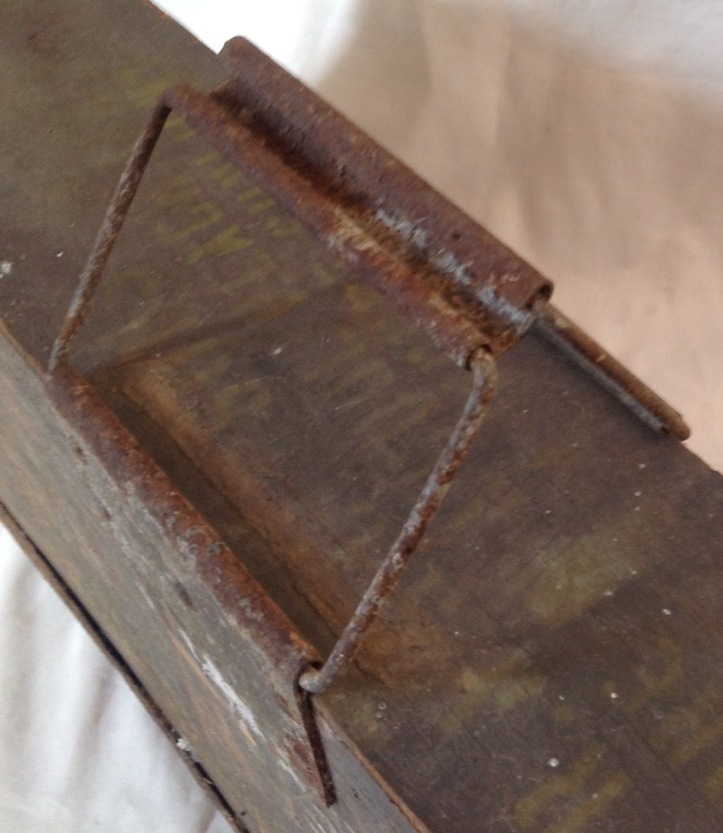 The markings on the front of the box are very worn:

An example in better condition shows how it should read:

From this we can see it held 234 individual insecticide sprayers in packs of three. Volume 2 of the Official History of Special Weapons and Types of Warfare gives a description of what these sprayers consisted of:

The individual “sparklet” was a small aerosol sprayer similar to a soda water sparklet bulb. The content consisted of ‘anti-mosquito spray’ with carbon dioxide to provide the pressure; it was sufficient to deal with 1000 cu.ft. Of confined space such as weapons pits or tents. It was operated by a metal break off top, in appearance somewhat like an empty .22 cartridge case. The content was ejected in the form of a fine mist which diffused quickly, with an immediately lethal but local effect. The majority of “sparklets” were manufactured in the United Kingdom, but a few firms in the U.S.A. made some on our behalf, although they were not an item of U.S.A. equipment. (In 1944/45 some 32 million were produced in the United Kingdom, the majority in 1945, and some 8 million provided from the USA)

The lid of the box gives instructions on how to store the sprayers correctly:

The RASC were warned to keep the box cool and away from direct sunlight.

The base of the box indicates who manufactured the sprayers:

This box is obviously very badly damaged and so needs repairs and a complete repaint, once this has been done it will be a nice addition to my jungle collection.