This week’s photo is a fascinating little snap of a British paratrooper in training:

On his head this paratrooper wears the distinctive training helmet which had a large ring of sorbo rubber under a khaki drill cover with a pair of ear flaps come chin straps coming down either side: 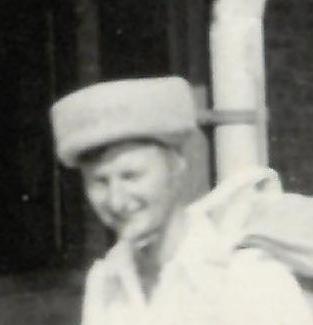 This trainee also wears a khaki drill step in oversmock that appears to have been issued primarily to those training at Karbit in Egypt or the Indian Parachute School at Willingdon Airport, New Delhi:

It is often forgotten that many men trained to jump by parachute in both Egypt and India. Ted Tegg learnt how to parachute in India:

On joining the army, I was first posted to the Royal Berkshire Regiment, after going through Primary training in Ballykinlar in N.I. and subsequent Corp training in Colchester I was posted overseas to India, primarily to join the Royal Berks in Burma.

It was there that I volunteered to join the Parachute Regiment and was posted to Rawalpindi, which was the training centre at that time.

There followed 7-8 days of intensive ground training in which we learnt about the parachute, how it worked, how to use it and more importantly, how to land safely.

I think more time was spent on landing technique than any other aspect of the parachute, to ensure as far as possible, a safe landing on the ground.

The second week started with two acclimatization flights, to get us used to flying and to try and minimise the air sickness problem.

Carried out in Douglas Dakotas, mostly over some of the foothills of the Himalayas, these were pretty rough flights. The RAF were responsible for the entire training program and our instructors were two flight sergeants.

The first drops were made by two people going out on each circuit of the aircraft, jumping from a height of 800-1000ft and landing on the DZ (drop zone), which was a fair size ploughed field.

Nobody had any idea what the first drop would be like, and speculation was rife.

In the event, each person had his own experience.

My own experience on leaving the aircraft, was to blackout momentarily, not losing consciousness or feeling any sense of falling, but I did lose my sight.

All senses returned , when with a slight jerk, the parachute canopy opened.

The first thing we noticed was the almost complete absence of sound, but we all got a rocket, after we returned to Barracks, for shouting at each other on the way down.

Standing in line in the centre of the aircraft, we hooked up to the wire overhead and moved along with the left foot forward on each step.

We did a right turn on reaching the door, and placing the instep of your left foot over the edge of the door, you kicked out with your right foot.

Hitting the slipstream, you did the smartest left turn of your life (probably the reason for my blackouts), and glided downwards on your back, the parachute opening as it went, due to the static line pulling the parachute out of its pack.

We did two drops in one day, one of which was at night.

This was something different as the only light was four green lights, placed one at each corner of the DZ.

Trying to assess the direction of drift in these conditions was difficult, and it was almost the last minute before you could get any idea where you were going, but we did make it.

I think it was the 5th or 6th drop that things went wrong, and i almost had a serious accident.

Leaving the aircraft with the parachute opening in the usual way, or so i thought, i found that i could not move my head or control the parachute in any way.

the reason for this was that the lift webs, the four straps which connected the parachute rigging lines to the harness surrounding the body, had become crossed and was jamming my crash hat on my head.

Not being able to look down to the ground to assess my drift, together with the loss of control, i had to take pot luck on how I landed.

I didn’t realise at the time that I was descending far faster than normal, and landed in quite a heap, with the parachute all around me.

I was one of the last to leave the aircraft, but the first one to hit the ground.

A number of observers on the ground were watching the descents, as they were made, and an Officer and a Sergeant approached and asked if i was alright.

I was fairly shaken, due mostly to hitting the ground so hard, not being aware of any injuries at that time, the Officer said, “You had a pretty rough time on your way down, you had better have a look at your parachute.”

Between us we spread the canopy evenly over the ground, and what I saw was quite frightening.

The damage consisted of the four panels in one gore, each being badly torn, and two others being similarly damaged, plus a number of small holes scattered here and there.

The parachute was then gathered up and taken to the edge of the DZ, where the Officer and Sergeant discussed the possible cause.

As far as I know, there wasn’t any enquiry into this accident, but i would assume the Officer would have made an appropriate report, if only to justify the damaged parachute, which was an obvious right off.

With training over, I was posted to the 16th South Staffs Parachute Battalion, part of the 44th Indian Airborne Division.