The floppy bush or ‘boonie’ hat has been a mainstay of British Army tropical headgear since the Second World War and we have covered numerous variations of it on the blog over the years. Tonight however we are looking at a transitional design that sits between the World War Two design we looked at here and the introduction of the DPM hat in the mid-1970s:

The hat is a shade or two lighter in colour compared to the wartime design, however that may just be down to extensive wear and fading. The design is broadly similar to its earlier incarnation, with circular stitching round the rim to reinforce it: 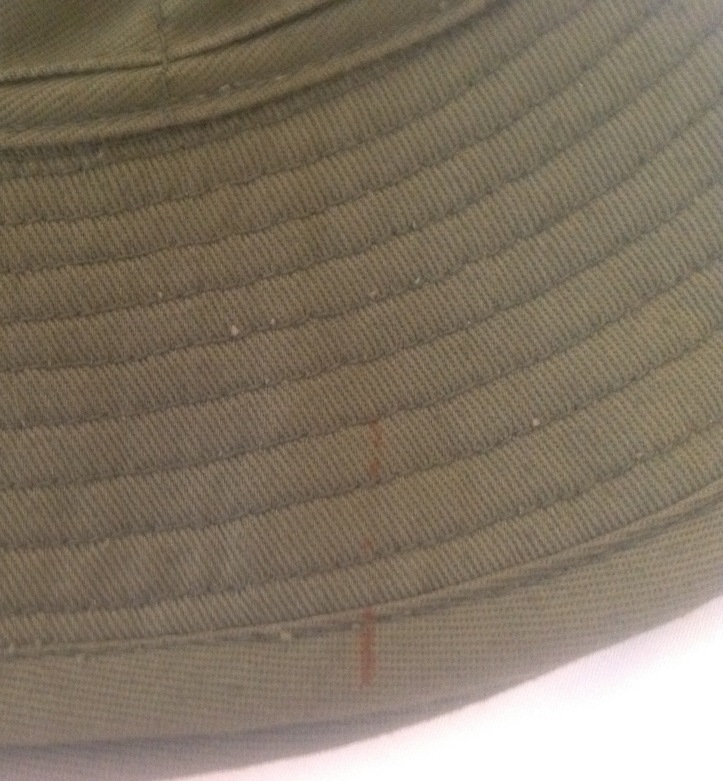 And loops for vegetation to be attached:

The top vents are covered with brass grilles, however this hat has clearly had a hard life and they are heavily corroded: 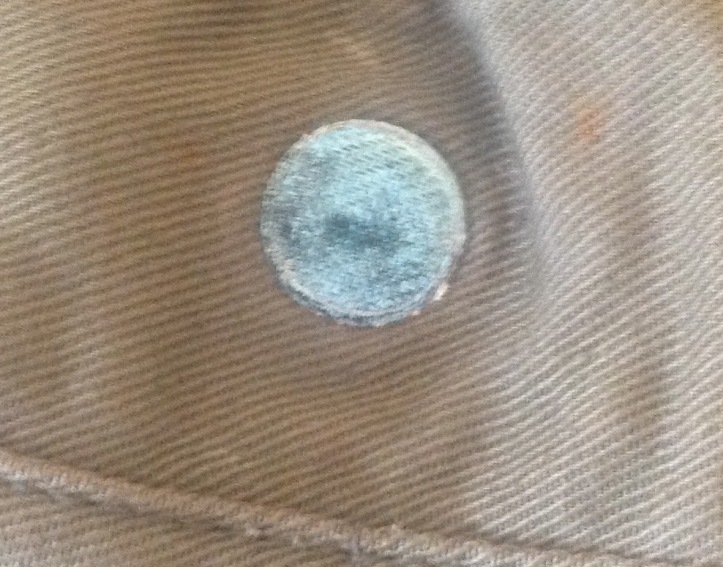 One new feature to this pattern of hat is the addition of two fabric tabs with metal grommets in them on the underside of the hat:

These allow a chinstrap to be threaded through if required. The inside of the hat has a stamped size, 7, and both an NSN number and what appears to be an old style stores code:

This suggests that the hat was made in that transitional period in the 1960s when NSN numbers were just starting to be introduced. This boonie hat was clearly used, as the original owner has written his name and regiment  inside in permanent marker:

The boonie’s longevity is due to a number of factors. It is comfortable, effective at protecting the wearer’s head from sun and rain and can easily be folded flat to put in a pocket: 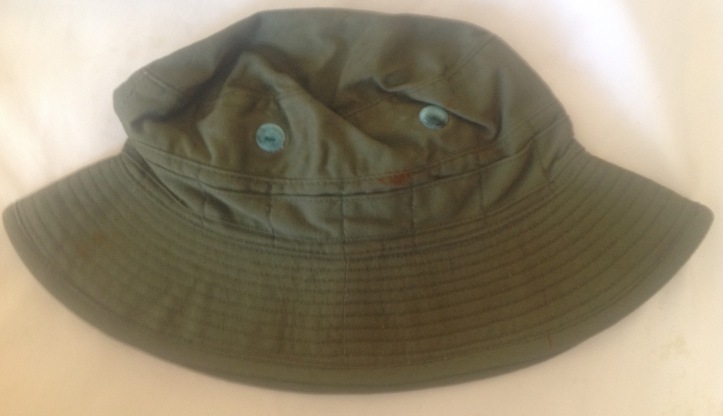 It also has that indefinable ‘allyness’ that soldiers are always seeking- the wearer of a battered boonie is automatically a grizzled veteran who has seen much action (regardless of whether he used his boonie for years in the jungle or had just bought one from Silvermans…). These hats are then customised as one ex-regular explains:

They’re cut down – it’s a fashion statement with a modicum of practicality. It is important to remember that all British soldiers strive to look “Ally” at all times. There are three levels of Ally (1) not-Ally (2) Ally (3) Ally as Fuck.

Issue kit or cheap civvie stuff is Not-Ally. Issue kit altered or supplemented with expensive or special forces stuff is Ally and rare, foreign and very cool stuff whilst standing over the body of a terrorist and chomping a cigar whilst staring 1000 yards into the distance is Ally-as-Fuck.

The issue bush hat has a large brim. It is there to protect against sun, fire ants dropping down the back of your neck and provide shade when fighting those ungrateful ex-colonies in South East Asia.

The problem is that the brims get wet and droop and look shite (the trick is to sow in some copper wire to keep it rigid). However, that big brim will maintain not ally and prevent moving to the hallowed Ally status. Therefore soldiers cut them down (or have tailors do it) – Three reasons in order of importance.