Modern combat boots are far more sophisticated than in previous decades, often being made of different materials and having special waterproofing capabilities that allow sweat to escape, whilst preventing water to come in. As such tradition shoe polish is not always sufficient to treat these items of footwear with and many manufacturers also supply the military with specific waxes and treatments for these new boots, much like civilian purchasers of hiking boots are encouraged to also buy the correct feeds and treatments for their footwear.

Tonight we are looking at a small pot of boot waterproofing compound, here made by a company called Greygate: 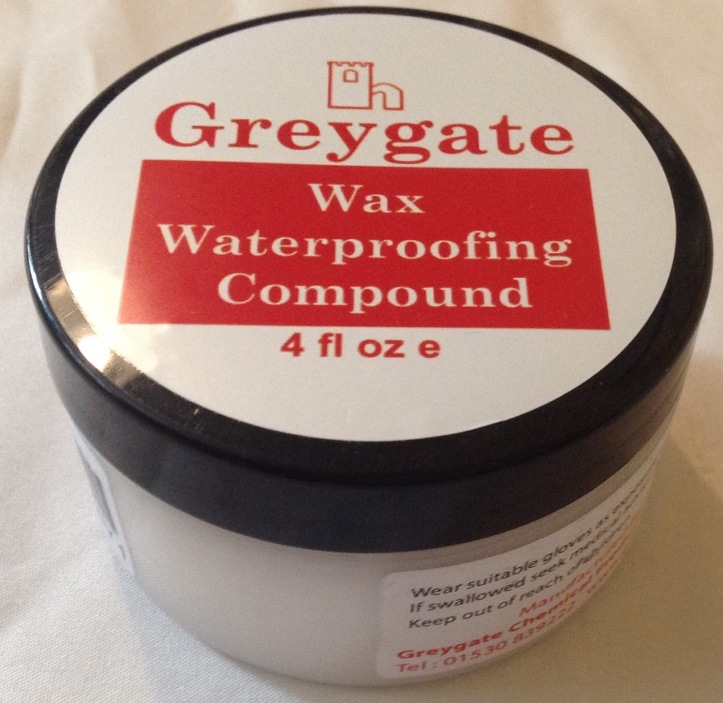 The compound is supplied in a small glass jar and as it has been produced for a military contract, a stores barcode label with NSN number is attached to one side of the outside:

The rest of the label gives warnings about the potentially harmful nature of the compound which is both flammable and can cause skin irritation:

The base of the jar indicates that it was manufactured in November 2017 and has a expiry date in 2020:

This wax seems to have been specially created for the British military and according to Cadet Direct it is:

Genuine British Forces wax waterproofing compound issued for use with all MOD Brown combat footwear. Unlike some commercial shoe polishes this wax-based compound has been formulated to nourish and waterproof MOD brown footwear without altering the natural colour of the sole or upper. Application with cloth recommended. Size: 125g 4 fl oz e. Colour: neutral.

The company itself markets the wax as a:

Blend of waxes and silicone to protect and nourish walking boots against the elements, without altering the natural colour of the sole or upper.

Used by the British Forces, Wax Waterproofing Compound issued for use with all MOD Brown combat footwear.