In June 2009 the British Army introduced a new combat helmet as an urgent operational requirement. This was the Mk 7 and it replaced the older Mk 6 and Mk 6A design, the shape of the helmet being updated in light of combat experience. Users of the older patterns of helmet had found it difficult to take up a prone position as the helmet dug into their body armour, tipped forward over their eyes and prevented them from firing easily. A new helmet was developed that had the same ballistic properties as the Mk 6A, but with a revised shape that allowed it to be used with body armour. The Mk 7 was a pound lighter than its predecessor and was produced in tan rather than green or black:

The helmet has an upgraded liner that features a mesh top section and padded panels around the head:

The chin strap was also upgraded with a three point suspicion system. The chin straps start at the back of the helmet:

They then run forward to two adjusting straps, one on either side:

A leather chin cup is provided to hold the helmet in place:

This is fastened by passing the end strap through a metal loop and folding the tab back on itself. Two press studs secure it and prevent it coming undone:

Some troops upgraded their helmets by replacing the press studs with a quick release buckle. Other changes made by troops included adding a loop to the rear of the helmet straps to allow it to be secured to body armour with a carabineer.

The manufacturer’s labels for these helmets are particularly inaccessible, being fixed under the rear of the liner. They contain details of the NSN number, a code for the manufacturer and a date, here 2011: 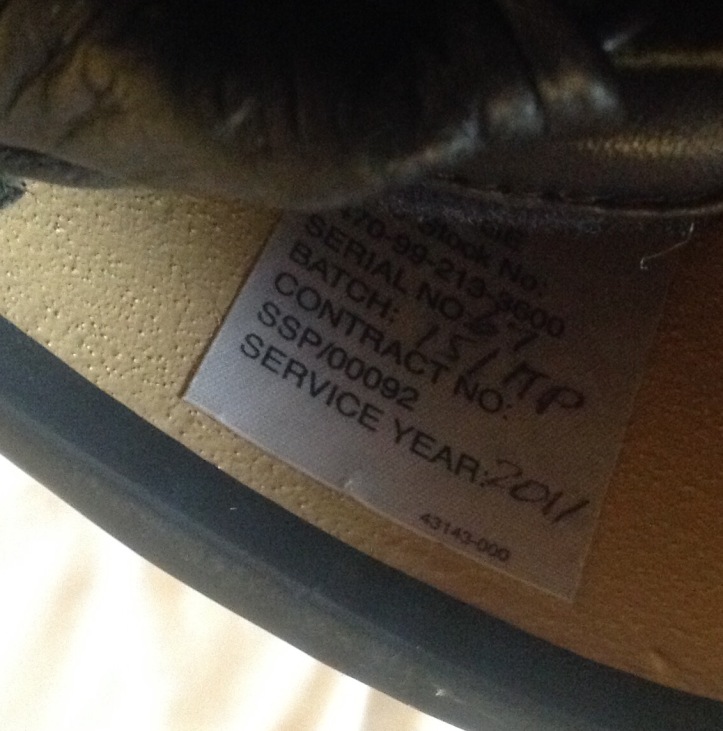 Just one firm made the Mk 7 helmet, NP Aerospace Ltd who traded as Morgan Advanced Materials. The Daily Mail reported on the introduction of the Mk7 helmet back in 2009:

New helmets designed to help British troops to target the enemy are being rushed out to Afghanistan this weekend.

The Ministry of Defence is issuing the lighter headgear following soldiers’ complaints that the current helmet is unsuitable for firefights with the Taliban.

Five thousand Mark 7 helmets, along with new Osprey Assault body armour, are being sent to Afghanistan for the troops of 11 Brigade who are starting a six-month operational tour.

The new British-made Mark 7 helmet is the first major change for 20 years – and looks more like an American helmet than the current pudding basin style. It is shaped to allow a soldier to lie flat and shoot straight, without the rear rim digging into his body armour and tipping the front rim over his eyes.

British soldiers are frequently having to fight the Taliban crawling along the ground for cover. Many have complained that when they have to fire  while lying down, they struggle to aim quickly at what may be only a fleeting target…

The MoD’s Urgent Operational Requirement order for new helmets was accelerated by the introduction of US-made Advanced Combat Optical Gunsights (ACOG) that sit higher on the soldiers’ SA80 rifles.

Lt Col Matthew Tresidder, chief of staff of the Defence Clothing and Textiles Agency, said 10,000 new helmets and body armour kits have been bought by the Ministry of Defence for £16million. The first 5,000 sets are going to infantry soldiers, engineers, drivers, medics, dog handlers and anyone who regularly goes ‘outside the wire’ of protected bases.

The remainder of the 9,000 servicemen in Afghanistan will continue to use the current protective kit.

Whilst designed to make it easier for troops to shoot from a prone position, this was not to be the case in reality and just four years later the same newspaper reported that specialist troops, especially snipers, were having to remove the helmets in combat to make shots:

British Army snipers’ lives are being put at risk because they are forced to remove ill-fitting protective helmets before they shoot at the enemy.

Crack marksmen have complained that it is ‘near impossible’ to adopt a correct firing position when targeting Taliban fighters in Afghanistan because of unsuitable kit.

The friction means elite UK sharpshooters are struggling to get ‘beads on’ insurgents laying deadly IEDs or planning ambushes because they cannot properly line up the target in their rifle’s cross-hairs.

To overcome the issue, some troops have taken the drastic step of removing their helmets before taking a shot – running the risk that they themselves could receive a fatal bullet to the head.

A senior officer has admitted that the ‘problem’ is affecting specialist soldiers in the warzone.

A serviceman has written anonymously to the magazine, which is published with MoD approval, flagging up concerns.

He said: ‘Snipers throughout the Army are struggling to adopt a correct fire position whilst wearing a Mark 6, 6A or 7 helmet – especially when combined with the Osprey.

‘Firing from low-profile positions such as the prone are near impossible.

‘Most service personnel go as far as to remove their helmets, especially when a more difficult shot is required, causing obvious safety concerns.

The Mk7 helmet is now being replaced with Virtus equipment and has slowly been trickling onto the collectors’ market for a few years now (despite many reservist units still using the older Mk 6 and Mk6A helmets). Its service life was brief and apparently much of the army’s stock was sent to the Ukraine when withdrawn from front line duties, proving to be a popular choice amongst troops fighting the Russians there.