French Postcard Sent Back from the Western Front

This week’s postcard is a bit unusual as, whilst interesting, the image on the front rather falls outside the purview of this blog: it depicts a pair of French soldiers, an infantryman and a cavalryman:

Obviously French military history is not what this blog is interested in, so why is it included? The answer lies on the back where we can see that it was sent by a British soldier home to his wife in England: 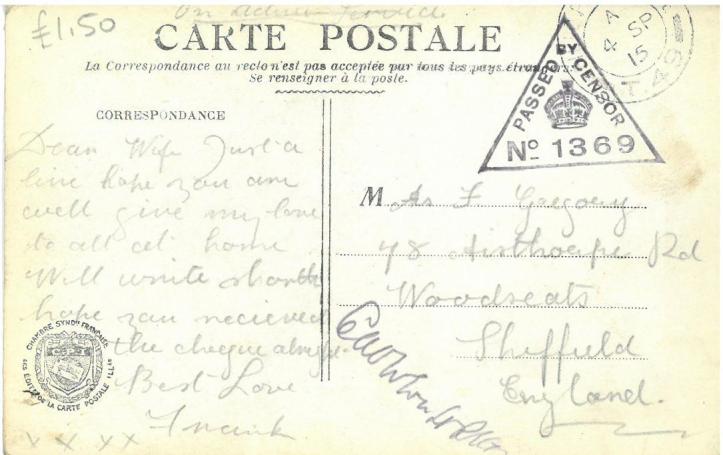 He has written in pencil ‘On Active Service’ at the top:

And it has the stamps indicating that it has been checked by a censor for anything incriminating and that it has been handled by a field post office, the post mark dates it to 4th September 1915: 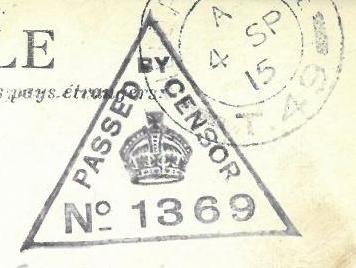 Censoring is interesting at ﬁrst but it rapidly becomes boring; no letter is allowed to leave without it having been read by an ofﬁcer and franked by him on the envelope; fortunately my platoon do not write very long letters though they write very often. A typical letter starts like this. ‘My Dear Father and Mother, Ellen and Mary, I take pleasure in writing these few lines hoping that you are in the pink as it leaves me at present.’ Many of the men talk awful drivel about cannon balls ﬂying around them, but as a general rule they are short and rather formal letters… The men always write very extravagantly after a spell in the front line – ‘All the ravines were full of dead Germans and Bulgars’, ‘It was absolute Hell!’, ‘I said more prayers then than at all of the Church parades I’ve attended’.”

The message itself is relatively banal, but the author does write to his other half with the best opener ‘Dear Wife’!

Just a line. Hope you are well, give my love to all at home. Will write shortly. Hope you received the cheque okay.

The letter was sent to Mrs F Gregory of Sheffield: 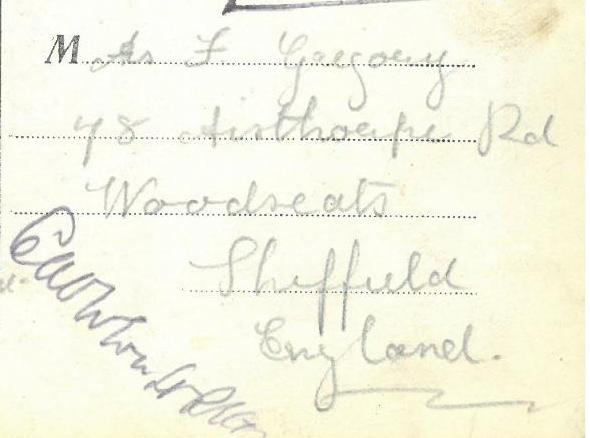 Sadly, although following up on a few leads, I have been unable to determine who exactly this Frank Gregory was, hopefully he survived the war and was able to be reunited with his wife.