In 2007 under a regimental restructure a number of infantry, light infantry and rifle regiments were merged together to form a single, seven battalion regiment (Five regular and two TA battalions) called ‘The Rifles’ this regiment was formed from:

The regiment adopted the rifle green beret as its headgear and tonight we are looking at an example:

This beret is made from a dark green wool, with a leather sweatband. This is adjustable using a drawstring. Once the beret has been correctly adjusted, these are tied off and tucked inside the sweatband to make a neat appearance:

The Rifles adopted a traditional light infantry/rifles bugle as their cap badge, here topped by the Queen’s St Edward’s Crown:

Surprisingly the cap badge is of white metal, but it is not anodized aluminium stay-brite, however this seems to be the case for all of the regiments cap badges and must have been a conscious decision of the regiment when it was formed: 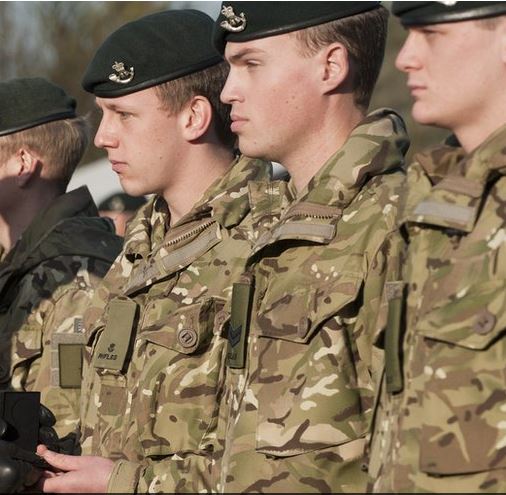 The label inside indicates that this beret was specially made for the regiment, and is of very recent manufacture, dating back just a few years to 2015: 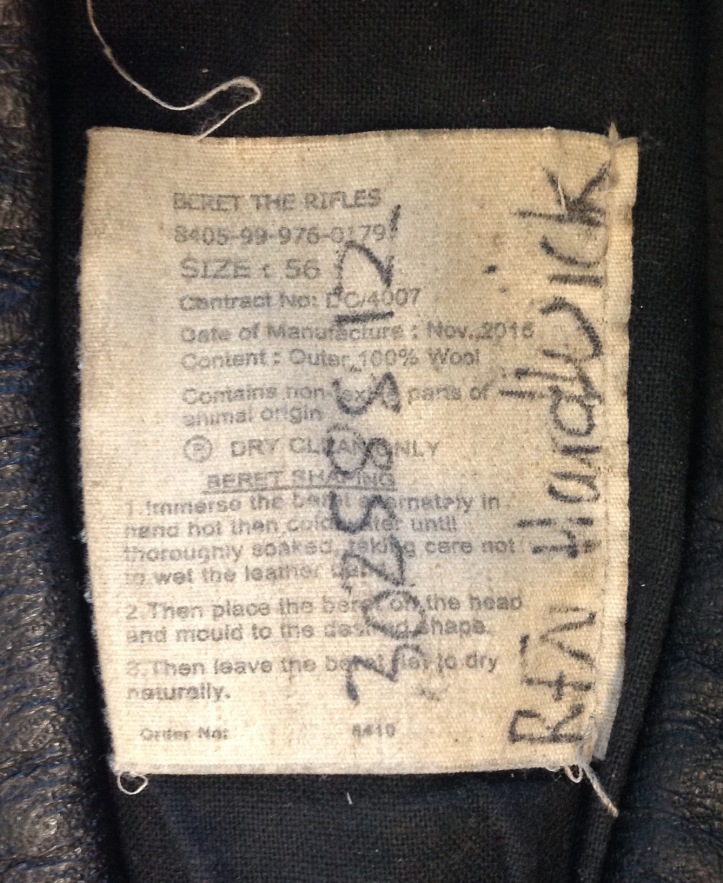 What is really nice is that this beret has clearly been issued and used as it has the rifleman’s number and name written inside on the label:

The rifles have had an eventful time over the last decade since they were formed, seeing regular deployment on active service. The 2nd Battalion, the 3rd Battalion and the 4th Battalion were all deployed in Basra in Iraq during some of the worst fighting of the Iraq War including the withdrawal from Basra Palace in September 2007.

The 1st Battalion undertook a tour in Afghanistan between October 2008 and April 2009 mentoring the Afghan National Army in Helmand Province. The 5th Battalion was one of the last British Army units to leave Iraq in May 2009. The 4th Battalion provided reinforcement cover for the elections in Afghanistan and to take part in Operation Panther’s Claw in Summer 2009. At the same time the 2nd Battalion was deployed to Sangin and was relieved in due course by the 3rd Battalion. The 2nd and 5th battalions of the Rifles returned for a six-month tour of duty in Afghanistan serving in the Nahri Saraj District in October 2011. In March 2018 the 2nd Battalion returned home after a six-month operational deployment to Iraq in support of Operation Shader.