Happy Christmas Eve! I hope everything is prepared and you are all ready for a merry Christmas tomorrow. As is traditional on this blog, over Christmas we look at a few items of militaria that fit in with the theme of the season. Christmas cards with a military theme are a perennial favourite for those serving away from home to send back to their loved ones. Although we have previously looked mainly at World War Two examples, this year we have a post war example sent from HMS Andromeda:

The card depicts a line drawing of the ship, cutting through the water:

And a map of her current voyage: 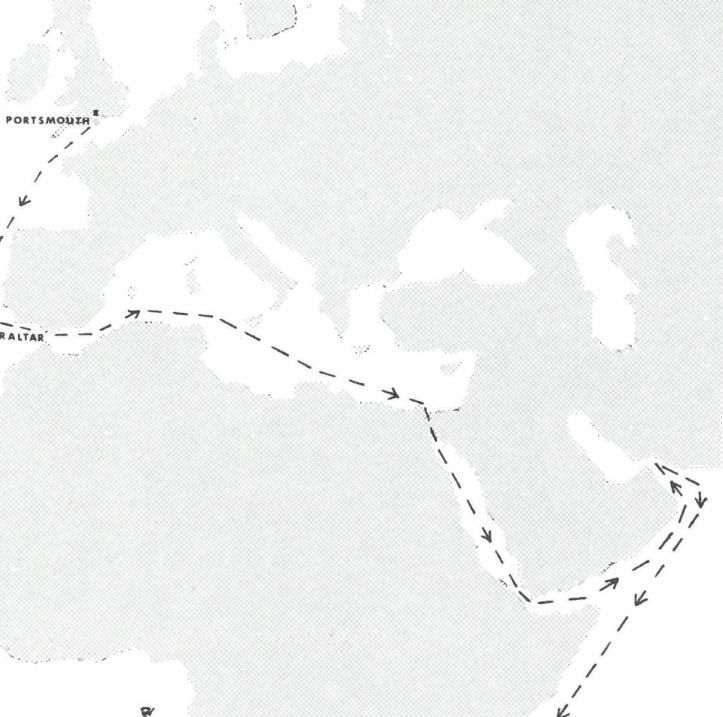 Inside we can see that the card was sent from someone named ‘Julian’ to ‘Helen & Co’:

HMS Andromeda was the last ship to be constructed at Portsmouth Dockyard in 1968 and was a Leander class frigate. She served throughout the Falklands and through until 1995 with the Royal Navy before being sold to India who continued to use her until 2012 when she was sunk as a target.

Christmas on board ship can be a difficult time for many who are away from loved ones, so every effort is made to make the day enjoyable for the ship’s crew. The following description is from the submarine HMS Vanguard, but is typical of many festivities across the navy:

Entertainment on board, although enhanced by modern technology (Kindles and hard drives being a God-send on a platform with limited space) remains broadly traditional.

Quiz nights and game nights all play a part, with the more traditional ‘Uckers’ now mixed with inter-mess Mario Kart.

A traditional service of carols was held on the Sunday before Christmas, with the choir of ‘King’s College Vanguard’ providing impressive harmony.

Christmas Eve was marked by a staging of ‘A Christmas Carol’ involving a spooky reappearance of the previous Executive Officer as the Ghost of Christmas Past.

Christmas day itself included the opening of presents around the tree, before the Commanding Officer and others helped serve up a sumptuous Christmas dinner for all.

The chefs on board deserve special credit for managing to create such a varied feast.

There was something for everybody on board from carols to Secret Santa, but just as importantly some space for quiet reflection and thoughts of loved-ones at home.

It may sound like all jokes and jollities, but there are good reasons for making an extra effort when on patrol.

Christmas is a sensitive time of the year and for many of the younger ship’s company who have struck-up relationships almost three years ago, couples have still not spent a Christmas together.

Those with young children up to three years of age have yet to have their father home for Christmas.

Every member of the ship’s company has sacrificed something which is emotionally important in order to serve with HMS Vanguard.