In October 1918 an innovative fund raising campaign took place in London that saw Trafalgar Square transformed into the battlefields of the Western Front. The ‘Feed the Guns’ Campaign took over the whole square and created a ruined farmhouse and windmill as well as trenches and original pieces of captured German equipment. Like many of these exhibitions, postcards were sold as souvenirs and to raise money: 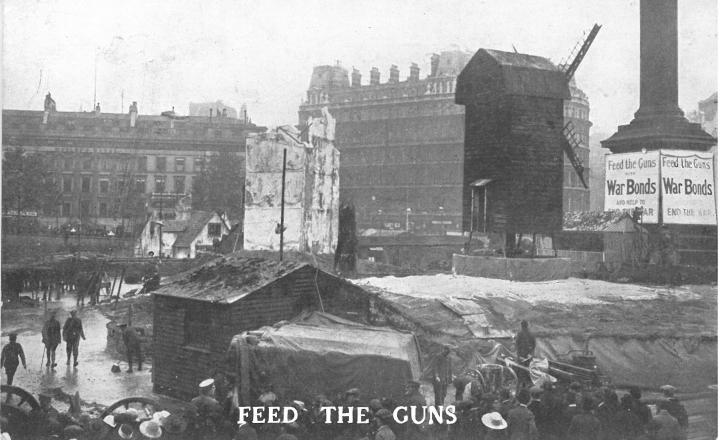 The London Illustrated News reported that the square was:

Being “camouflaged as ruined churches, windmills, and cottages. The lamp-posts, even, will figure as shell shattered trees. Investors will be given application forms for War Bonds in a camouflaged military hut, and will be conducted through sandbagged trenches to the great guns in their emplacements.

The Daily Mail reported on the setting up of the exhibition:

The work of transforming Trafalgar Square into a ruined village on the western front in readiness for next week’s “Feed the Guns with War bonds” campaign was begun yesterday. Men of the “Camouflage Corps”, or Army Special Works School were busy making sandbag trenches and erecting a ruined farmhouse.

Seven big guns are to arrive tomorrow, and during next week investors will be able to take their bonds to a gun and “feed” them into the barrel, where they will be stamped with a special device.

One item that could not be disguised was Nelson’s Column, however advertising hoardings were fitted around its base encouraging the purchase of War bonds:

The fountain has become a French farm and a windmill covers one of the famous lions:

The lion himself can just be seen beneath the fake windmill! The destroyed village can be seen ranged out in the square: 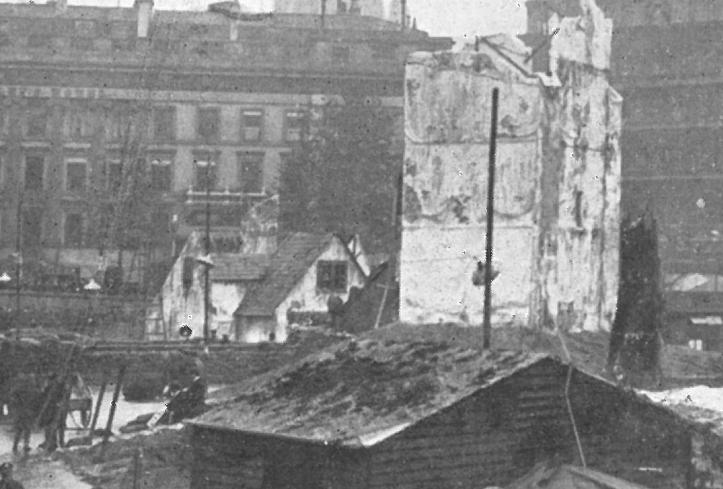 The campaign was nationwide, with London as its focus, and lasted a week. £31 million was raised and this event was clearly popular as can be seen by the crowds queuing up for admission:

London alone raised over £23 million pounds and much of this money came for the visitors to the ‘Feed the Guns’ exhibition in Trafalgar Square.