I really like mess china, but items do not come up for sale too frequently. Therefore I was very pleased to be able to add a soup bowl from the Canadian North Shore (New Brunswick) Regiment:

The soup bowl is made of white china, with a green band around the interior. The regiment’s cap badge is positioned in the centre of the inside of the bowl: 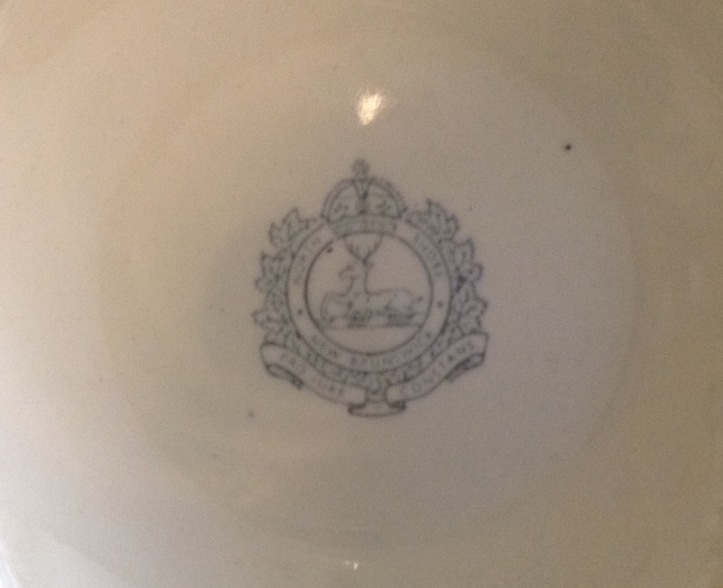 This is transfer printed and has a King’s crown indicating the bowl dates form before 1952. The current version of the badge is identical but with a Queen’s Crown:

There are no maker’s marks on the underside of the bowl: 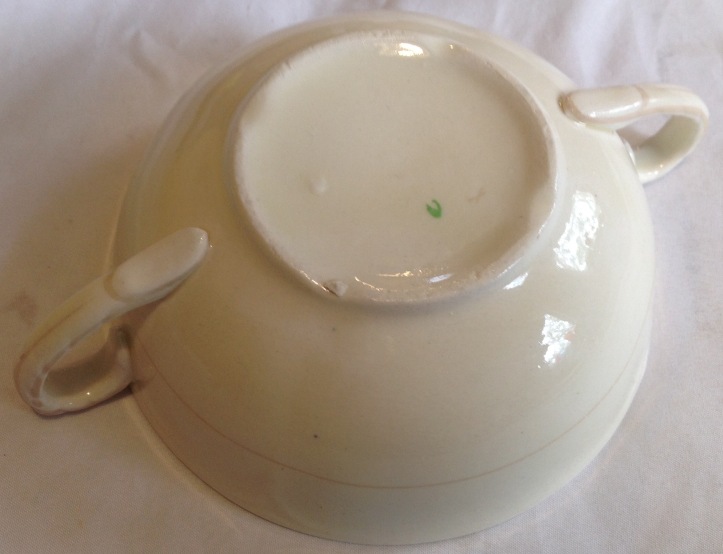 But there is some beige decoration on the outside and on each handle: 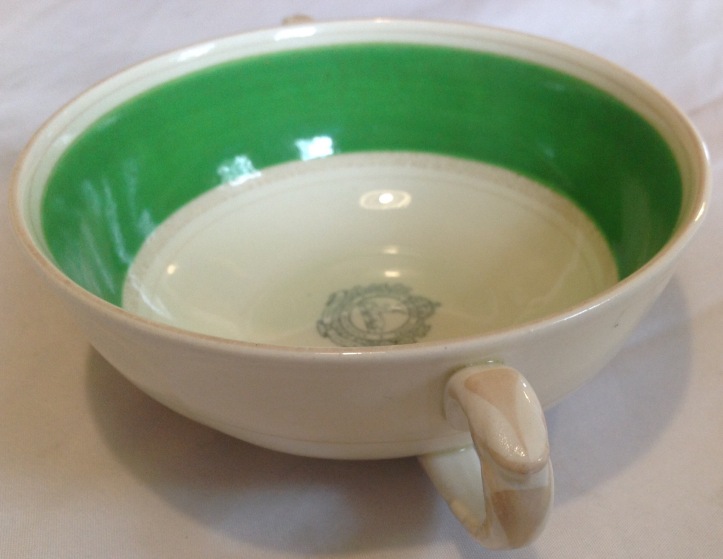 This bowl was purchased in the UK and by according to the seller had not been purchased outside this country. This then most likely dates it to the regiment’s service during World War Two. During the Second World War, the regiment was first stationed in Woodstock, New Brunswick and then Sussex, New Brunswick. When it shipped overseas, it was initially stationed in Liverpool, after that it moved to Scotland near the castle of the Duke of Argyll.

On June 6, 1944, the regiment participated in the landing on Juno Beach, landing on Nan Red sector and losing nearly 50 men. On June 10, it liberated the town of Saint-Aubin-sur-Mer, Calvados. Newsreel footage of the North Shore Regiment landing under fire taken by the Canadian Army Film and Photo Unit became one of the most-used film depictions of the Allied D-Day landing.

On July 4, 1944, the men of the North Shore Regiment participated in Operation Windsor, the attack on the Carpiquet airfield. It lost nearly 130 men, and it was later known by the regiment’s chaplain as the “graveyard of the regiment”. The regiment later fought in Caen and all through France, continuously advancing with the 8th Canadian Infantry Brigade. It fought in places like Ranville, Bourguebus Ridge, Falaise, Quesnay Wood, the Laison and Chambois.

It helped clear the coast of France in late August and early September 1944, then it advanced into the Netherlands, taking part in the Battle of the Scheldt. It fought in Breskens Pocket in flooded fields and harsh conditions. After the Scheldt, it moved onto the rest of the Netherlands, fighting near the Bergsche Maas River at Kapelsche Veer.

In February 1945, it moved into Germany via amphibious landing. It fought in the Rhineland, the Hochwald, but then it doubled-back to the Netherlands and conquered the Twente Canal, and liberated Zutphen where it met its most brutal urban fighting since Caen. It then moved back into Germany in April, and it ended the war on German soil.