The question of how to supply paratroopers with adequate munitions when they land in enemy territory is one that has long vexed military planners. The easiest method is to use supply containers parachute dropped alongside the men, however it is very easy for them to become separated and the last thing you want is to leave men in enemy territory, surrounded and unable to defend themselves. Carrying sufficient munitions on the body is also a possibility, but the weight and bulk of them makes landing difficult and a man who breaks his leg when he hits the ground is of no use in a battle. The British thought long and hard about how to overcome this solution and they developed a number of specialist pieces of webbing for paratroopers. These were designed to be worn on the upper thigh when jumping out of the aircraft. A quick release tab was then pulled in mid-air and the webbing pouch fell away, but was secured by a static line to the man. This then ensured he was unencumbered when he landed, but his supplies were only a piece of string away from him. We have previously looked at an example of the pouch designed for use with Sten gun magazines here. Tonight we are looking at the case issued for use with two-inch mortar bombs:

This webbing case is secured up the front with three hook and staple type quick release tab pull fasteners:

Inside is space to hold six two-inch mortar bombs:

The underside of the top flap is marked to indicate it was made by MECo in 1943:

It is on the rear however that things get really interesting:

A pouch is fitted for the drop line:

A cord was tied to the very heavy duty loop at the top, then coiled and fitted into the pocket, the other end being tied to the paratrooper. When the case was released, the cord payed out from this pouch before coming to a stop when all the cord was deployed. Four brass loops are also fitted to the rear: 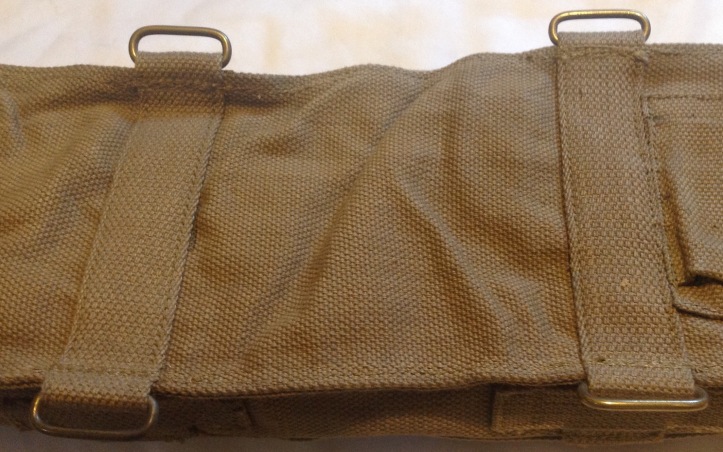 These allowed the case to be attached to a webbing harness on the soldier’s thigh. When he pulled a quick release tab, these fastenings came undone and the pouch was free to fall. Webbing loops are fitted to the side of the case at the side of each loop as part of this securing process:

The frame attached to the leg was this one, the wire being the quick release pull:

In the end these cases were dropped in favour of larger, more general purpose drop bags that allowed more than just the ammunition to be carried. Wilfred jones was a Sapper armed with a two inch mortar who parachuted into Normandy and he describes the amount of kit he had to carry:

I was the mortar bloke for the troop. I was jumping No 6 with a rifle and a two-inch mortar. In addition, I was carrying 110 rounds of .303, two pounds of PE, which is plastic explosive, two 36 grenades, one Gammon bomb and two magazines for the Bren, some two-inch mortar bombs, a change of clothes and twenty No 27 detonators and two ration packs.