I am very pleased to say that tonight marks the start of a new mini-series of posts covering the last variation of the Australian 1988 Pattern webbing set. I have covered two pieces on the blog before, the early pattern of water bottle carrier and the later version of the Minimi ammunition pouch, but I have recently managed to add a homogenous 2010 dated set of webbing to my collection and we are going to look in detail at the various components on a Wednesday for the next couple of months.

The 1988 Pattern set was the first complete indigenously designed and produced webbing set used by Australia, previously the sets of accoutrements had been based off of foreign designs, the British 37 Pattern and the later US M56 sets being copied and modified to suit Australian needs, but neither design originating in the country.

The end of the Vietnam War saw major changes to the military uniforms and equipment in Australian service. Auscam was introduced as the first Australian camouflage pattern and a new webbing set was produced to match this, entering service at the very end of the 1980s: 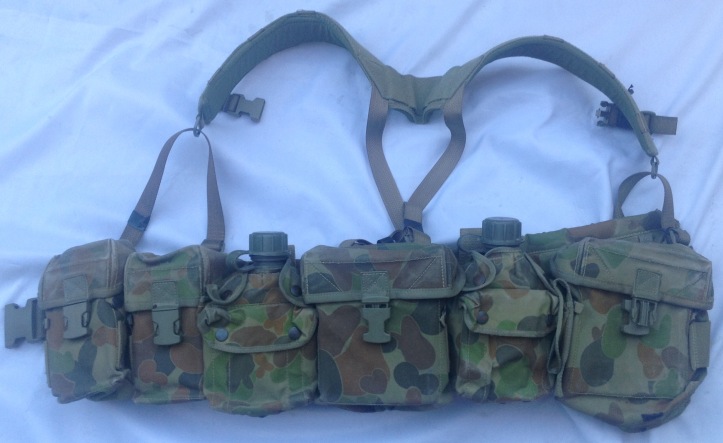 The design was based around a belt and H-Yoke, with a large padded section to protect the wearer’s hips. Originally a haversack was worn centrally on the back of the belt, but this was quickly dropped in favour of an extra Minimi pouch and an extra water bottle. The original designs used metal clips and had press button buckles, by 2010 all the fittings were in plastic and fixed Fastex buckles were used. There are numerous set ups of the webbing to be seen in photographs, mine is a typical example and has the following components:

Here we see a bunch of Australian Cadets practicing with the F88 Austeyr battle rifle, all wearing various configurations of the 88 pattern webbing set:

On operations the choice of pouches would depend on the load and weapons a man was carrying, one soldier explains:

I simply wore standard Australian army issue. I wore the normal webbing belt, a “double” belt comforter and 5x Minimi pouches, 2x water bottles and a bayonet. This was all held together with “fastex” plastic clips and DPCU tape

An Australian Cadet handbook explains about the system:

Webbing is designed to be versatile and interchangeable. Individuals will set up webbing to personal preference. Typical webbing will consist of the following pieces of equipment:

We will continue with further in depth posts about the components in the coming weeks.