Every so often I come across a piece in my collection that I feel I surely must have covered on the blog before now, but on closer inspection find out that for some reason I have overlooked it. Tonight we have one of those pieces, the 25 pattern holster. We did look at this holster back in the early days of the blog when I compared it with the 37 pattern RAF holster here, however it has never had a post of its own and I feel that as one of the few remaining pieces of 25 pattern I haven’t covered this oversight needed amending. The holster itself is the second type of 25 pattern holster and is made of the standard blue-grey webbing used by the RAF for all its 25 pattern pieces: 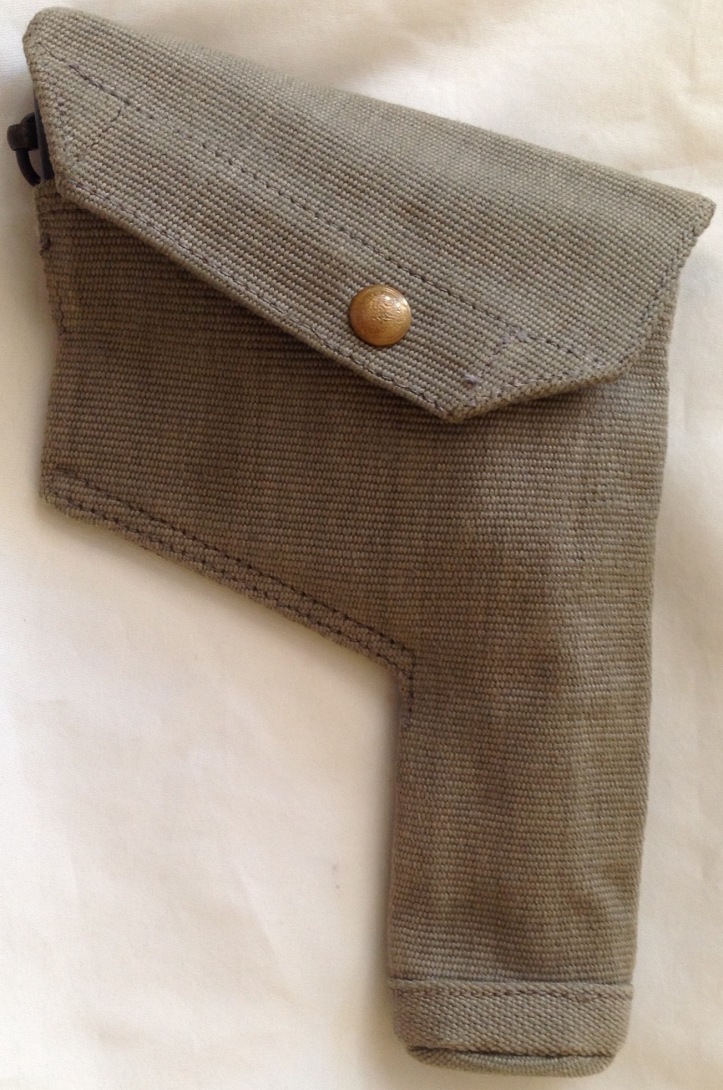 The earlier design of holster had featured a wooden plug in the end, much like the naval 1919 pattern holsters and was cut very differently to accommodate a Colt .455 automatic. At some point the design changed to one more suitable for revolvers which were the standard sidearm of the British Empire and this is the version I have in my collection. The lid of the holster is a simple flap secured with a brass press stud:

A metal grommet is fitted into the base to allow any water to drain away:

The rear of the holster has a pair of metal C-hooks to attach it to the belt with and a webbing channel to carry a cleaning rod:

This exterior channel and the lack of a horizontal C-hook is the easiest way to identify these holsters as being 25 pattern rather than 37 pattern, the patterns being virtually identical otherwise.

The inside of the holster is stamped up with an Air ministry crown, a stores code and a date of 1941:

These holsters were issued as part of the 25 pattern web set to RAF personnel who needed to carry sidearms. Up until the middle of the war, any airman or officer transiting from one base to another was supposed to be issued with a revolver (I doubt this was universal practice) and the accompanying webbing set. Even after this order was rescinded, webbing and sidearms were routinely carried by RAF police and men working in enemy territory such as at forward air bases. As such these 25 pattern holsters saw service right through to the 1960s when Browning Hi-Powers became the normal side arm.