One of the larger pouches issued with the Osprey Mk IV is that for 100 rounds of LMG. This pouch is made of the standard MTP cordua nylon and is deep enough to hold 100 rounds of 7.62mm ammunition for the GPMG:

The belted ammunition sits inside and adds a considerable weight to the pouch: 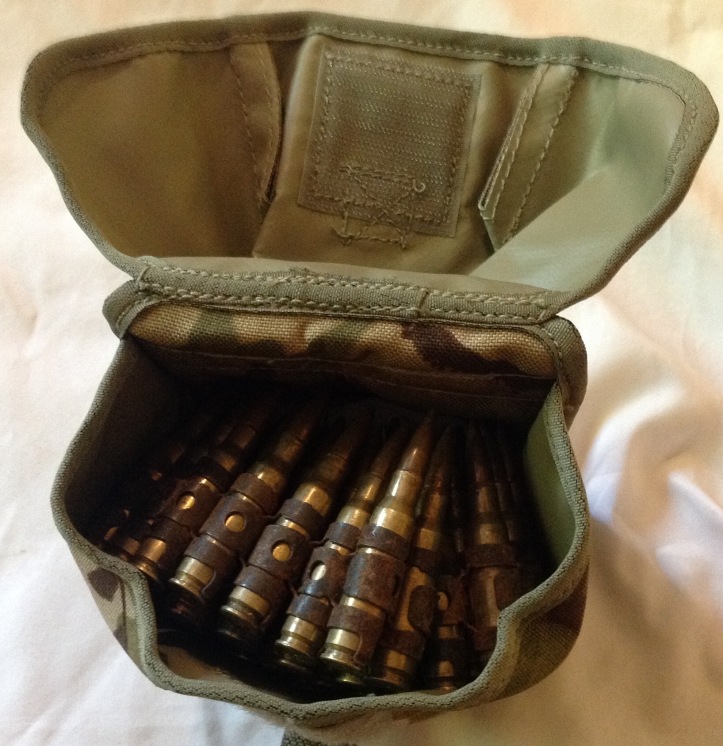 All this weight requires the pouch to have substantial PALS straps on the rear, with multiple loops to ensure it attaches to the vest securely and doesn’t come away in combat:

The pouch is closed with a large box lid:

As ever a label is sewn to the rear with stores information:

The weight of ammunition was always a factor on operations. One ex-British Army soldier explains what men typically carried in Afghanistan:

I always carried 6 magazines of 28 rounds each of 5.56mm for my personal weapon plus perhaps that many rounds again either loose or in clips which could be speed loaded into the magazines. We also each carried not less than 200 rounds of 5.56mm belt ammunition for the Minimi light machine gun and/or 200 7.62mm belt rounds for the GPMG. I can’t remember exactly but it certainly was around 30 lbs of ammunition alone.

Each man in a foot patrol would have carried that much, the gunners carried more link ammo because their main weapon was the GPMG or Minimi. It depended on the job. If we were part of a force going on a full offensive op then it’s likely we would have carried much more but as we were mainly in a defensive roll due to our main task we depended heavily on close air support . We were taught to be disciplined with the ammo and to make every shot count. No spray and pray. If we had to, one guy could start breaking down some of the 5.56 belt ammo and load it into empty magazines. So in reality each guy had at least 300 rounds. That’s a lot of bullets in the real world.

The gunners carried 600+ rounds for their machine guns so between us we could bring a lot of firepower to the fight for a prolonged period. I promise not one round was fired unless an enemy fire position had been spotted which was usually easy due to the very low standards of the local Taliban fighters. Most of their lead flew right over our heads and contacts didn’t last long because we spotted and then smashed them or they ran out of ammo very quickly and then ran away.

In vehicles we would have brought with us several thousands of rounds of 5.56 and 7.62 ammo in boxes and rounds for the .50 cal if we had one. In addition there might have been boxes of rounds on belts for an automatic grenade launcher and plenty of bombs for the mortar if we were equipped with those weapons.

We had the occasional contact with Taliban forces made up of foreign fighters. These guys were more motivated and smarter soldiers (less likely to be high!) than the locals and much better trained so contacts with them lasted much longer, 4 hours or so, and could be very tricky, fast moving battles. With close air support from fast jets, attack helicopters and drones on our side the Taliban never got the upper hand but in the period of time between the start of the contact and when the first attack helicopter arrived on the scene, the foreign fighters could be very bold and would try their best to get close to our defensive positions. A lot of ammunition was needed at times like this. When the AH’s arrived which could take anything from 10 minutes to an hour, their cannons would turn the most persistent Taliban into high protein fertiliser.

Along with Electronic Counter Measures we carried on our backs, spare batteries for the ECM, water, ammo, weapons and body armour which alone would easily be half your load, plus whatever other stuff you were told to carry for some military reason, it was all very heavy. I don’t think that civilians realise how heavy all this equipment is and how tough it is to work with it all on. Soldiers, especially those in ‘teeth arms’ regiments deployed to Afghanistan, would regularly be patrolling and fighting out on the ground on foot in 100F degree heat carrying 60+ lbs of equipment and ammunition. We would occasionally have to move in non-tactical but still dangerous situations carrying over 100 lbs of stuff. This might explain why my knees, hips and back are so painful and stiff now. 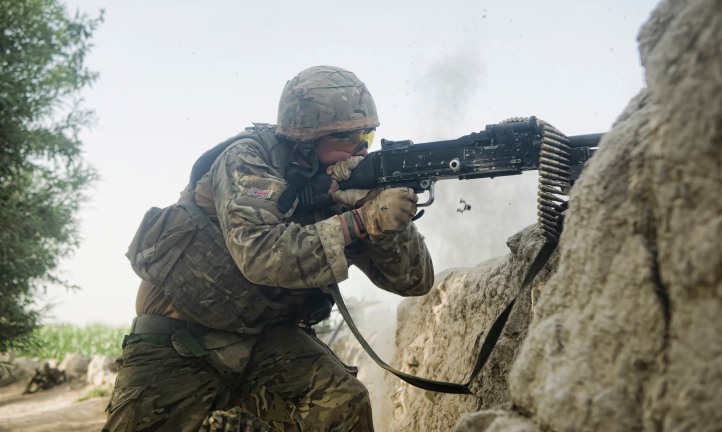