When the SA80 rifle was introduced a whole new calibre of cartridge entered British service, the 5.56mm NATO round. This round had been produced as prototype ammunition for at least five years when the SA80 was rolled out in 1985 but large scale British manufacture had not yet started so initial ammunition had to be sourced from overseas. The first British produced rounds began to be manufactured in 1984 but it took time for production to ramp up. The new cartridge was produced at the factories at Radway Green and was of a conventional design with a brass casing:

Like all modern ammunition this round is rimless and has an extractor groove cut into the base: 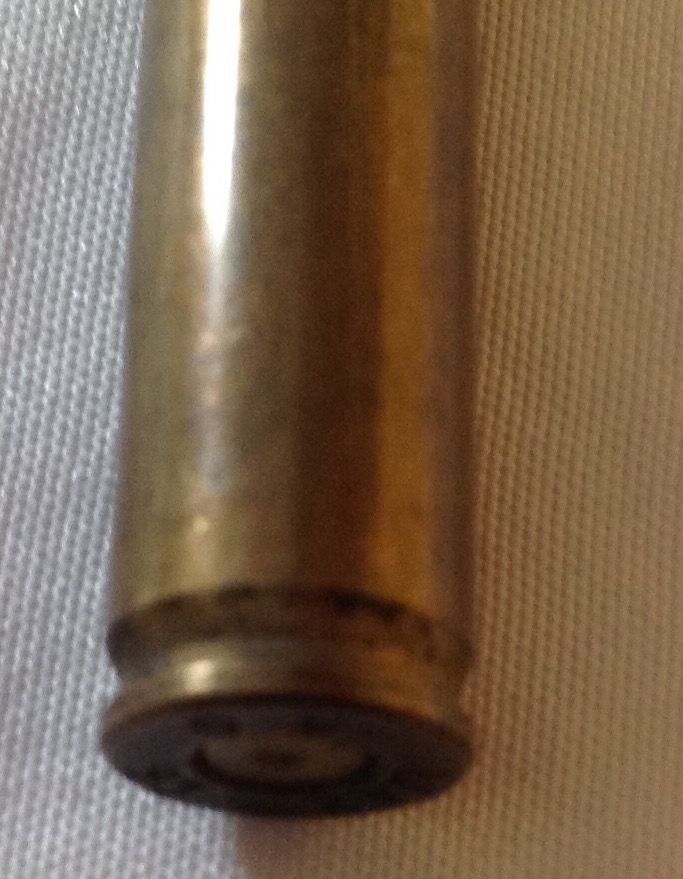 The bullet itself weighs 4.0 grams and is projected using 1.52 grams of propellant, either NNN (cut tubular) or later nitrocellulose (cut tubular):

This particular round was produced in 1993 by Radway Green, as can be seen but the headstamp:

I suspect that this inert round has actually been assembled from a fired tracer round, rather than a true ball cartridge as the ball rounds had the designation L2A1 and L2A2 when in service and this is marked as L1A1.

When the new ammunition was issued, it warranted a special explanation in the publicity material for the new SA80 rifle:

The ammunition in the new standard 5.56mm calibre meets the performance requirements of both the UK and NATO. In meeting operational requirements it is fully effective up to a range of 1000 metres as generally required in infantry operations. To meet the stringent standards of the UK ordnance Board all rounds are manufactured under high quality control conditions. A variety of natures are available, i.e. Ball, Tracer, Blank Drill and Low Power Training.

An important feature of the ammunition is that it is less than half the weight of the alternative standard NATO 7.62mm ammunition. This enables more rounds to be carried by an infantryman thereby extending logistic capability and operational effectiveness.

The relative merits of 5.56mm versus 7.6nmm ammunition have been debated since the introduction of the smaller calibre. The 5.56mm round is lighter and easier to fire more accurately, but lacks the range and power of a 7.62mm which has remained in service for the GPMG so the army has ended up with two calibres of ammunition. It was felt most combat would be at short range so the lower power would not be an issue and generally this has proved to be the case, however in Afghanistan troops found themselves up against insurgents equipped with old fashioned rifles who could engage targets from well outside the range of the British infantryman’s weapon. As is so often the case, there is no perfect cartridge size and there are good arguments on both sides of the debate, what is clear is that despite research into intermediate cartridges the 5.56mm calibre is here to stay in the short to medium term.