This week’s postcard comes from the Second World War and is a rather nice painting of a pair of Curtis H-75 Cl aircraft:

This aircraft is better known to British readers as the Mohawk. As observant readers will have realised, the aircraft in the postcard are wearing French markings. The French bought 100 machines in 1938 and despite making up only 12.5% of the French Air Force in the Battle of France, they accounted for nearly a third of aerial kills. Following the fall of France the remaining stocks of French aircraft on order from Curtis in the United states were diverted to RAF use and in total the RAF ended up with 229 of the aircraft. Many were used in India and Burma as the RAF considered them obsolete in Europe. Here we can see a Mohawk in India in January 1943: 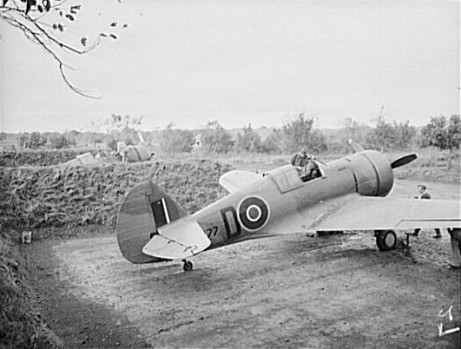 The South African Air Force also made use of the aircraft in the East African campaign and for training. By 1944 though the aircraft was long past obsolescence and relegated to training and local defence roles.

This postcard though was produced in the UK and sent in 1941, as can be determined from the back of the card where there is a nice clear postmark:

I admit the UK link with this week’s postcard is a little slim, however i thought the image so dynamic that readers would forgive this slight detour and enjoy it regardless!