The bayonet is 305mm long, with a 203mm long blade and due to the blade shape continued to use the same scabbard introduced for the earlier bayonets. This example is an L1A3, introduced in the late-1950s, which made the protruding press stud used to release the bayonet flush with the rest of the pommel:

A long deep fuller runs down each side of the blade, this allows a vacuum to be released when the blade has been stabbed into the torso of a man and thus allows the bayonet to be withdrawn more easily:

This particular bayonet also has the modifications introduced into production from the mid-1960s onwards when the length of the fuller was reduced and the ricasso lengthened due to a perceived weakness in the design at this point:

Originally the fuller ran almost the entire length of the blade, this feature was deleted on the L1A4 bayonet introduced in the 1970s which reverted to a full length fuller. The cross piece has a large ring, 14.9mm in diameter, to fit over the muzzle of the rifle: 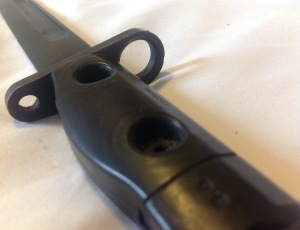 The grips of the bayonet are made of a hard black plastic, secured with two rivets:

The combined ‘ED’ trademark of the Royal Small Arms Factory Enfield can just be made out stamped on the plastic grips. Like all British bayonets of the post war period, this blade is of very high quality and finish. The bayonet was to see extensive use in The Falklands War, as witnessed by this visceral account by Guards Lieutenant Robert Lawrence MC:

I stuck my bayonet into the back of his arm, dug it right in because I had run out of ammunition. He spun wildly on the ground and my bayonet snapped. And as he spun, he was trying to get a Colt 45 out of an Army holster on his waist. So I had to stab him to death. I stabbed him and I stabbed him, again and again, in the mouth, in the face, in the guts, with a snapped bayonet. It was absolutely horrific [retrospectively — at the time he recalls crying out ‘Isn’t this fun?’ not long after this incident]. Stabbing a man to death is not a clean way to kill somebody, and what made it doubly horrific was that at one point he started screaming ‘Please. . .‘ in English to me. But if I had left him he could have ended up shooting me in the back. I took his rifle, moved on, shot a sniper, picked up his and moved on again.