Tonight we are looking at an example of the 08 belt from my collection, as ever we turn to the fitting instructions, in this case from 1908:

Waistbelt: This is issued in two sizes, large and small, the overall length of the webbing being 48 and 40 inches respectively.

The width in each case is the same, viz., 3 inches. It is fitted with a large buckle in front 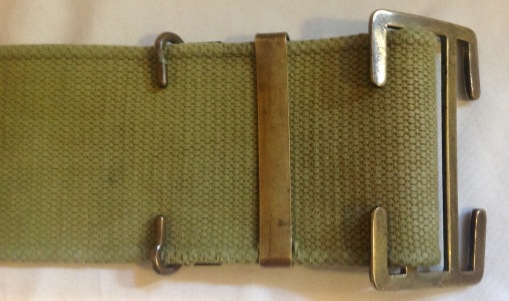 and with two smaller buckles and two end pieces in the centre of the back. 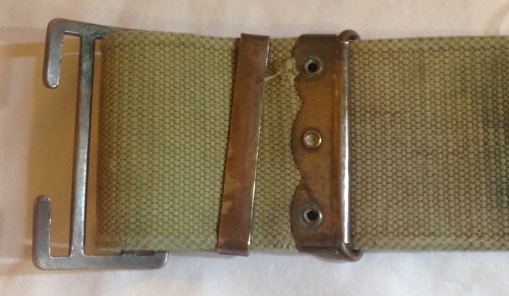 The initial sizes of the belt were expanded in 1909 to include a 44 inch medium sized version. This example is a large, as indicated by the large ‘L’ stamped on the inside of the belt:

Also just visible is a /|\ mark, a date of 1918 and a makers stamp for I believe MW&S which is Martin Wright and Sons Ltd. There are several different ways to fasten the buckle on the 08 webbing, the simplest method illustrated below: 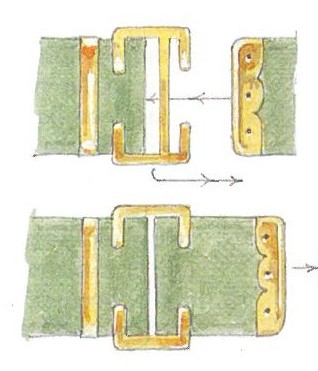 Other methods tucked the loose end of the belt behind to neaten up the appearance:

The straps on the back of the belt were also folded back on themselves to neaten the appearance when the belt was worn on its own. These belts were popular and produced in large quantities for thirty years so they are not too hard to find- reproductions are also available but the webbing is often thin and does not stand up to use with the heavy 08 pouches as well as an original.