There are certain iconic items of British military history that as a collector I really want to add to my collection. One of these is the pre-WW1 scarlet tunic that represents the British Army throughout history until the outbreak of the Great War. I have now added one of these tunics to my collection and I am very happy with it. This tunic conforms to the changes made to uniform regulations in 1911, just before that conflict broke out and was officially referred to as the 1912 Pattern. As such it was still being rolled out when the Kaiser intervened and it was relegated to a piece of dress uniform for ever more:

The uniform is made of a fine scarlet wool, secured up the front by seven brass buttons: 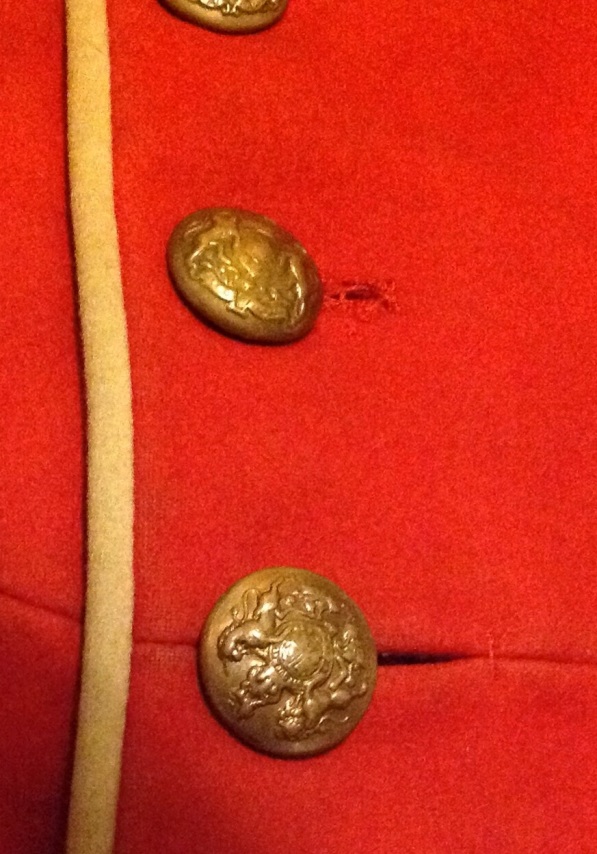 When I acquired the tunic these were post WW2 staybrite buttons, I have replaced them with period brass general service examples to restore the tunic to its former glory. Note the buff piping down the front, undress tunics lacked this embellishment. The shoulder straps clearly identify this as a 1912 pattern tunic as they are in a solid facing colour, rather than just piped around the edge as in earlier patterns:

The buff facing is continued on the collar, which is noticeably squarer cut in the 1912 pattern than earlier designs: 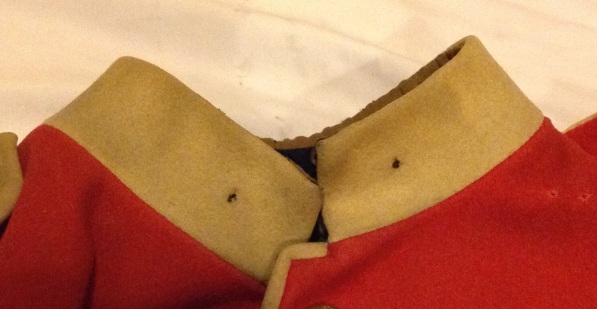 The buff colour signifies this tunic was for The Royal East Kent Regiment. The buff piping is continued on the tail of the tunic where it makes up the ‘false pocket’ decoration:

As can be seen I still have two staybrite buttons to replace, but with this uniform needing thirteen brass buttons I have exhausted my supply for now! On the waist are two brass belt hooks to help support the weight of a belt and hold it in the correct position:

Inside the jacket can be seen the remains of the paper label that was once pasted here:

My understanding is that at this period the letter codes referred to clothing depots rather than dates, the ‘D’ indicating it was part of the stock at Dublin. Although I cannot be sure, my thoughts are that this tunic was never issued before the outbreak of WW1, but was reconditioned for use by a regimental band in either the inter-war or post WW2 period, this might explain the drummer’s badge on the left sleeve:

The badge is a high quality embroidered drum, with extensive padding beneath. I doubt it is correct for a pre WW1 uniform, but it seems too nice to remove. This uniform is in lovely condition considering it is over 100 years old, and makes an impressive sight with the leather belt and frog that came in the same lot:

I am only missing a Home Service spiked helmet or glengarry and some collar dogs to finish off what is a very distinctive and evocative impression.