We haven’t had a ‘Tuesday Finds’ post in a long time, mainly as the items I have been picking up have warranted a detailed post in their own right. Today’s market did however bring up a few of those little items that I like to find so much. There was one larger and more impressive item we will return to later, but today’s three little objects were only £1 each- again proving this hobby is open to all regardless of budget.

One of the most popular wireless programmes in WW2 was ‘The Kitchen Front’ a five minute radio short every morning that offered simple, healthy and frugal recipes to help housewives on the home front make the most of their rations. The shows had a warm chatty style and the recipes were very popular- this little book collects some 122 of them: 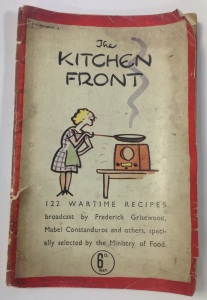 The book dates from 1942 and I will be giving some of the recipes a go- others such as the Roast Calves Head will remain in the pages of history!

This little bronzed badge is typical of the smaller ‘flaming bomb’ cap badges used by the Royal Artillery as an alternative to the large field gun shaped cap badge:

This example is finished in bronze indicating it was used by an officer. The fittings on the back of the badge have been removed and replaced by a pin to turn it into a brooch:

This rather nice glass tankard with a chromed handle has an etched Pegasus of the Airborne division and the inscription “Royal Engineers. 1st Airborne Division’: 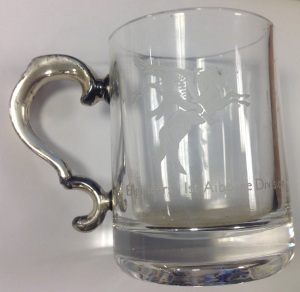 Although I don’t think it is wartime, it definitely has some age to it and is very heavy, sadly the chrome plating on the handle is starting to wear but it remains a nice piece.