Today we reach the milestone of 100 posts and 2000 views on the blog. To ‘celebrate’ this tonight we are looking at the second of three new additions to the collection I picked up on Saturday, and you have the dubious pleasure of seeing me acting as a human mannequin…

The monsoon cape was a garment produced in the, perhaps vain, attempt to offer troops in the tropics some protection from the torrential downpours that were common in the region. The heat and humidity of the sub continent required a lightweight garment that would dry out quickly and could be rolled and stored easily during the day. There was a long tradition of using voluminous capes in the British Army, the shape throwing water clear of the wearer and the design covering equipment worn underneath easily.

This cape is Indian made and is a collared cape in tan coloured, cotton duck fabric: 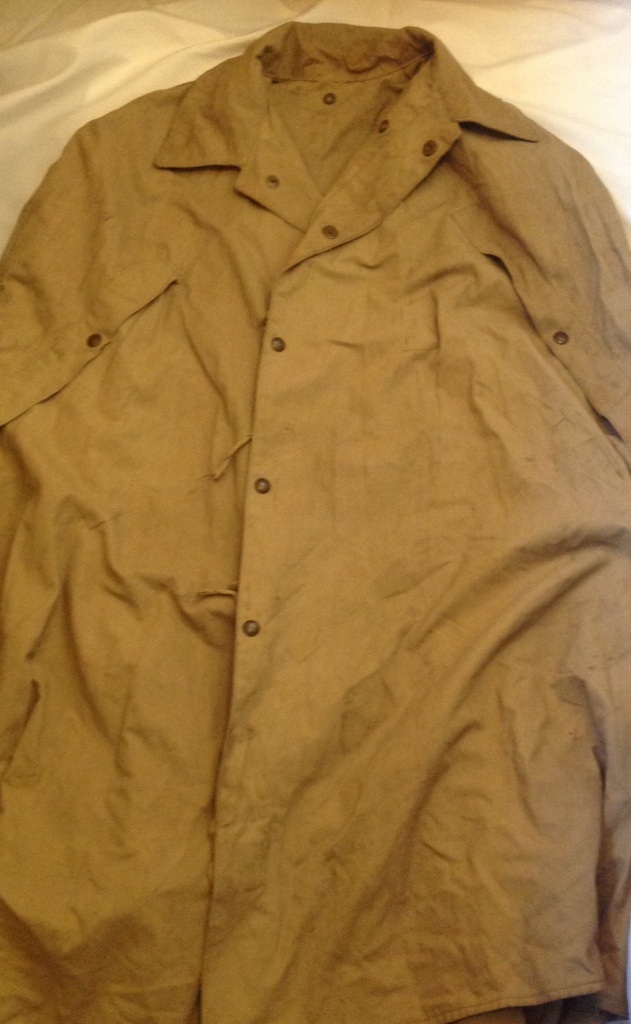 There are two slots in the body of the cape with poppers to secure them:

These open up to allow arms to pass through when having to use a rifle whilst wearing it:

The front of the cape is secured by tapes and Newey Studs:

Interestingly this is a different pattern to that illustrated in Brayley’s ‘KD and JG’ book where buttons are used to secure the examples illustrated. According to Brayley’s book, tan equipment was discontinued in late 1943 in favour of jungle green colouring. As the Indian army mark indicates though, this cape was made in January 1945:

This suggests that some manufacturers continued using up stocks of the old coloured fabric after this date. The cape has another stamp on it with the number 48 and M:

What these represent is now lost to history. The cape is secured by two cotton straps:

These pass diagonally over the chest and secure at the rear like nurses’ capes of the period which allows the cape to be opened and thrown back allowing access to the webbing beneath:

The ends of the straps are secured with typically Indian coconut buttons:

The cape is named to a Private Addison:

These capes are not easy to find and I am very pleased to have finally added one to my collection. They are a very iconic item worn in the Burma campaign, and although they look faintly ridiculous they were widely worn, but might not have been that effective:

“In Ceylon we have been issued with an absolutely useless piece of equipment namely, Wait for it! THE MONSOON CAPE useless because when wearing it, you could do nothing, but ride a bicycle, which we did not have. You actually got wetter and stickier from your own sweat, in a downpour than if you let the cooling monsoon rain pour off your shoulders.
Added to this cape the Officers had the, Ahem! added nicety of a HOOD, which we as the other ranks had not. Of course, even in such a downpour, no Officer would put his hood up, over his cap, as the CO had not covered his cap with his hood. All of a sudden the CO must have thought of the cost of the replacement of his cap and says to his aide-de-camp Jim Page. Jim! Jim! put up me ‘ood; put up me ‘ood! Jim rushes to obey. No one had thought of the amount of rain that this monsoon will have decant on to us mortals, serving the King.”