Today has been, pleasingly, a day or Royal Navy finds. The second hand market is very much a case of pot luck, and I seem to find Army and Air Force items far more easily than I do RN ones so any day with naval finds is a good one!

Since the First World War all Royal Naval ships have had a ships crest or badge. This is usually a pictorial badge representing the ship’s name in varying degrees of obviousness. The actual badge on the ship is normally made of cast metal and is quite large, however smaller plaster replicas are produced to be given on behalf of the ship to various affiliates, dignitaries and fellow units. Go into most RN and RNR establishments and the walls of the bar are decorated with different ship’s badges.

This set of four all seem to date from the late seventies and early eighties. The ships represented are HMS Hecla, HMS Waterwitch, HMS Endurance and HMS Fawn which were all in service at the same time. None were warships in the traditional sense, being instead survey and ice patrol vessels:

Commissioned in 1964, HMS Hecla was the lead ship of the Hecla Class of oceangoing survey ships. She served for 30 years, including as an ambulance ship in the Falklands before being decommissioned in 1997. The badge has four red flames on a black background, representing volcanoes- the ship being named after an Icelandic volcano

Originally called HMS Powderham, Waterwitch was an inshore survey vessel. She was converted from a minesweeper in 1960 and was in service until 1986, including some time attached to Liverpool URNU.

HMS Endurance was an ice patrol vessel in use from 1967-1991. Originally the Danish Anita Dan she was purchased by the Royal Navy and used in the Antarctic. She had an eventful twilight career, including being heavily involved in the opening stages of the Falklands war, two wasp helicopters form HMS Endurance were involved in putting the Argentinean submarine Santa Fe out of action. The badge depicts an albatross, a bird renowned for its long endurance flights, over an iceberg indicating the ships purpose.

HMS Fawn was a bulldog class hydrographic survey vessel that served with the RN from 1968 to 1991. Although the class was designed for service overseas, with the discovery of North Sea oil the ship and her sisters spent  much of their time surveying the British coast. The ships badge depicts the eponymous fawn with a sextant, indicating the ships survey role, behind.

Ships Photos
This set of official photos depicts a number of RN vessels and submarines. The two photos we can identify depict HMS Phoebe, a Leander class frigate: 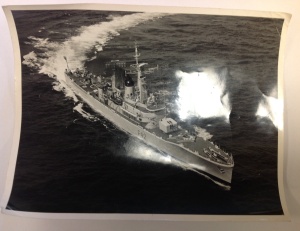 And HMS Norfolk a Type 23 Frigate:

This picture has an official stamp and date on the reverse dating the picture to 1989. 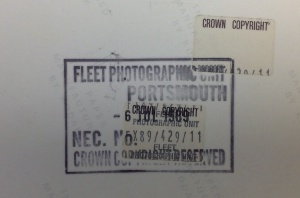 The red ensign on the rear of the ship suggests the picture was taken whilst she was on her trials before she was commission into the RN.
The other photos depict an Upholder class submarine:

These patches, one printed and one embroidered, are for the Yorkshire and Northumberland Training Brigade. The brigade was formed in 1948 and according to the IWM:

The badge is similar in all respects, other than that the colour of the rose is white rather than red, with the sign of the 55th West Lancashire Division of WW1 and 2, itself adopted by the post WW2 TA24 Engineer Group. The connection between the Division and the a Training Brigade is not clear. Cole states that the badge represents the preponderance of Yorkshire units in the group, which contained all the Yorkshire regiments (except KOYLI) and the Northumberland Fusileers…The signs were worn on the left arm only, below the unit shoulder title. 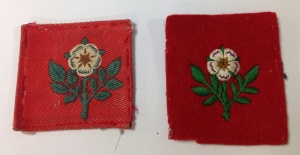 Although a civilian item, I picked up this stick of shaving soap to add to my WW2 personal kit as it is typical of the privately purchased toiletries purchased by troops throughout the war from the NAAFI. The writing on the package dates it to the second half of the war: