The usual morning trip to the market has turned up a few nice bits again. Whilst I went a little over my budget, I am pleased with what I’ve picked up and there are some very nice bits.

I have a large number of uniforms within my collection, from all three services covering the whole of the twentieth century. However up until now all these uniforms have been for men. I have not consciously avoided adding women’s uniforms to my collection, however there are fewer of them out there due to the much smaller numbers of female service personnel and consequently they are often more expensive than their male equivalents.

I have finally rectified this by purchasing a jacket which would have been worn by a second officer (lieutenant) in the Womens’ Royal Naval Service, or WRENS. The WRENS were founded in the First World War and despite being disbanded in 1919 and reformed in 1939. It was the only women’s branch of the armed forces to retain its name after WW2 and it retained its seperate identity until it was absorbed into the main Royal Navy in 1993. 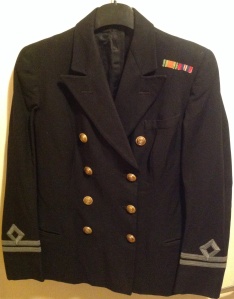 The WRNS officer uniform was based on its male equivalent, this example being made of fine barathea, fastened by a double row of gilt king’s crown naval buttons:

Light blue lace at the cuffs indicates rank, with a diamond replacing the male ‘executive curl’:

The navy were also unique amongst the armed forces in having jackets that fastened in the female style i.e. right over left. This example has the medal ribbons for the Defence Medal and the War Medal:

Based on the design of waterbottle issued in the Great War, the Mark VII was an updated version introduced just before the Second World War. The old Blue enamel was replaced by a dark green version and instead of stitching the string holding the cork to the felt cover it was now fastened to a small wire eye welded to the neck of the bottle.

This design of waterbottle would be used throughout the war and into the 1960s. This example is missing its felt covering and has a few knocks but is in good condition otherwise; it is faintly marked 1955 on the base. I have a fair few of these now, but due to the different webbing sets I am collecting i can always use a few more.

This rather battered postcard cost me the princely sum of 50p. According to the inscription on the back it shows the 4th Royal Irish Dragoon Guards’ Colours and Escort at Haworth, a small town in West Yorkshire, famous as the home of the Bronte Sisters.

The  4th Dragoon Guards were raised in 1685 and became famous in the First World War when a squadron became the first element on the British Expeditionary Force to engage the German Army in 1914 in Mons. The Regiment was amalgamated with the 7th Dragoon Guards in 1922 to form the 4th/7th Dragoon Guards.

The dress of the civilians and the use of Full Dress uniform leads me to believe the photo was taken before the First World War, whilst the small figure of a soldier in Service Date in the background dates it to after 1902 when that uniform was introduced.

Whilst not strictly military, I bought this passport mainly for one reason: the Visa stamped inside. The use of passport documents in the UK goes back to 1414, but the widespread issue of such documents really began during the First World War, despite widespread opposition from the British public throughout the interwar years.

This passport was issued to Mr Rowland Hardcastle of Leeds on 28th April 1937. Mr Hardcastle is described as being 5 ft 3 1/2 inches with blue eyes and dark brown hair and born on 5th August 1905. There are a number of foreign visas stamped inside, the most interesting being this one:

Issued in 1938 by the German consulate in Liverpool, this visa stamp has the Nazi swastika and eagle stamp clearly visible. By the stamps he seems to have had business in Cologne. It is sobering to realise that just a year later Britain and Germany were in a head long slide to war.